on March 14, 2017
When I was a kid, my parents took us to the home of my late paternal grandfather's best friends - The Ashers.  They were a wealthy older couple.  Old Atlanta money.  I remember him fixing me and Laura a ginger ale (or a Coke, but soft drinks on ice) and he was showing my mother some of the artwork he collected.

This part I don't remember, but I have been told - my six-year-old self said to Mr. Asher, "You have a very impressive gallery."  He thanked me and I continued that my mother collected art as well - the things Laura and I made at school, and she hung them in the laundry room.

The Ashers sent my sister and me a very generous Christmas present that year - clothes.  Mine were a white sweater and a burgundy corduroy Izod skirt.  This was the early 1980s.   Izod was a BFD, even if you were a first grader who didn't care about labels.

I later (like 30 years later) learned he sent my parents money and asked them to get us something we'd like.  Either way, it was above and beyond, and clearly, it made an impression.

The Ashers were lovely people - they were kind to us, they were very generous to their community - and they were patrons of art.

Now, I don't make Asher money.  I do OK, but the thing we do have in common is appreciation of fine art.

And like a lot of people, I keep my favorite art where I'm sure to see it every day.  I'm talking about, of course, my bathroom.

There's some precedent, here.  My maternal grandfather had a print in his bathroom that is etched in my mind as the ne plus ultra of bathroom art: 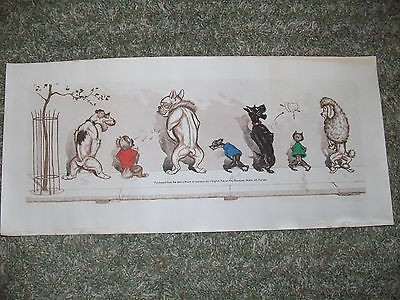 Why yes, that is dogs peeing  on a wall.  I was fascinated by this as a kid.  And who wouldn't be?  The artist, Boris O'Klein (let that sink in), called the series Naughty Dogs of Paris.  That's right, people - there's  A SERIES of these.  More than just one-offs.  You can get prints of this on eBay.  This one's title is Comme Nos Maitres (Like our Masters).

Anyway.  I may need to take this offline and get one.

Thing is, where would I put it?  Great question, because, at the moment, my gallery is at capacity.

Here are the pieces currently on display: 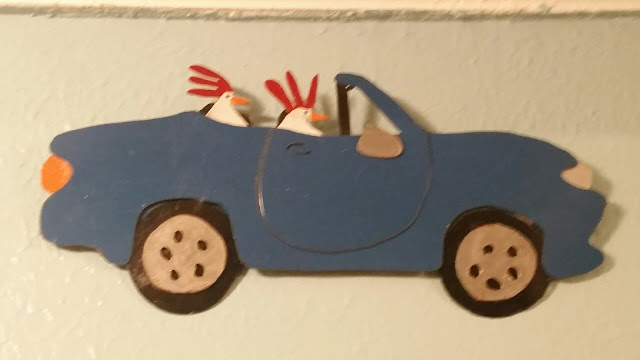 This is a piece my mother bought for me at Lakewood Antique Market one weekend - because it reminded us both of driving around in her convertible. 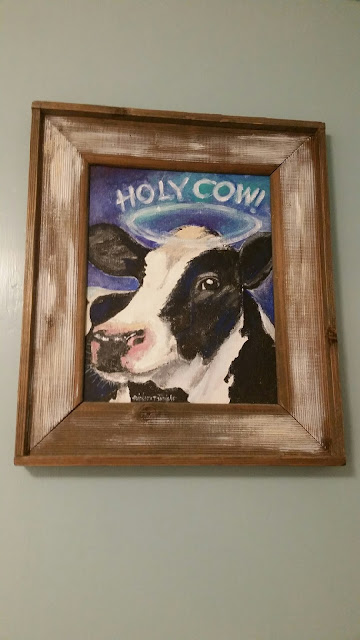 This was a gift from my sister - we saw it while tooling around our hometown one weekend, and I fell in love with it.  I've had it about 20 years, give or take. 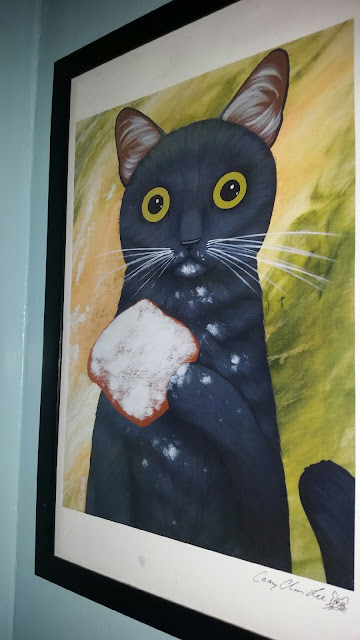 I really wish I could have afforded an original at the time.  I saw him and his work on Jackson Square in New Orleans and I fell in love with it.  But it was too expensive (at the time - I was broke, basically).  He told me there was a shop several blocks away that sold prints of his work, and off I went.  He does a lot with cats holding things.  Crawfish, Sushi, Pizza, Cupcakes, Voodoo Dolls... I can't explain it, except to say, it tickles me.  It's the essence of NOLA to me.

Probably because I had the exact same expression as the cat the first time I ate a beignet: 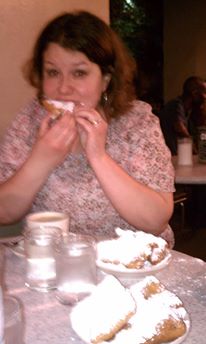 Anyway.  For the moment, that's my collection.  It's a small bathroom.

I have some other art in my house.  I'll have to show you the front of house wing some time.

Now, because we started naughty (with the dogs), I'll tell you about one of my favorite art encounters ever, which is q.

When I was 29, I went to Paris with my parents to celebrate Mom's birthday.  She was turning sixty.

So, we're at Musee D'Orsay, which is lovely and houses a lot of impressionist work.

One of the last paintings I came face to, well... face with was a work by Gustave Courbet entitled L'Origine du Monde (Origin of the World).

I am not going to put a picture of it up, because it is Super NSFW.  But I'll link you to the Wikipedia Page for it, here.

Naturally, I loved it, and naturally I bought several postcards of this work in the gift shop.  I did not send them because, I do have a modicum of common sense.  That said, it's very, very well executed, even if the subject matter is a bit...earthy.

Earth with out art is just eh.