on February 25, 2017
Most people who have met me find this hard to believe, but when I take personality profile tests, I typically fall ride on the fault line between introvert and extrovert.  Most people assume I'm extremely extroverted, and typically, I am.

That said, I get drained by social events, and I do require a fair amount of "alone to recharge" time.   The other thing is I have a little social anxiety.  Basically, any time I agree to some event, I regret it and dread it until I get there and I have a great time.  And that's how it always happens.  You would think I could circumvent the anxiety with the time proven fact that I actually love going to parties once I get over the dread of it.

I was explaining this last night at dinner with a friend. She got it right away, because she, too, experiences anxiety.

So, dinner last night at The Smiling Elephant.  It's a great little Thai place next door to my Vet's office.  And no, I don't want any "Panang Cat Curry" jokes.  It's just geographical.  Since I'm trying to eat sensibly, I stuck with a rice paper roll and a cup of Tom Kha soup, which is something that should, by all rights, taste weird.  It's a bunch of ingredients that you just can't imagine together, but they are perfection.

The first time I ate Thai, I ordered badly, and I said that it reminded me of eating a pork chop covered in Mounds bar filling.  It was off-putting.  The second time I ate Thai was with colleagues - the CEO and VP of Marketing at a smallish company.  I ordered a safer dish, and they asked how spicy I wanted it - I said I really liked spice, and so they loaded it up for me.  But Thai spice is a special kind of spice.  I ended up eating it as tears ran down my face, and they both laughed their asses off.

After that, I became a pro at Thai food.  Well, at least, not a laughingstock...

That said, I first went to The Smiling Elephant a few years ago, and the folks I was with ordered some weird, weird shit, and I was not impressed - and this restaurant has won all kinds of Best of Nashville awards.  This visit made me realize it's all knowing how to order.  And that I don't like fish sauce.

So, that was last night.  Today, we slept in.  Mostly because we woke up early and had a hard time getting the dog to come back to bed.  So, I left the house a little before 11 to run over to Trader Joe's.  It was packed, of course, but I wove my way through the morass of people who have no situational awareness.  I bought my groceries and made a quick Kroger stop for lunch stuff.  I got home and grilled us some lunch.  One of the many benefits of living in the South is that you can grill pretty much any day of the year.

Then, I washed the dog.  She hates it while it's happening, but as soon as she's out and allow to run free, she's the happiest dog on the planet.  Maybe her bath anxiety is similar to my social anxiety.

Anyway, our next task was to suit up and head down to Bridgestone Arena.  We were meeting some friends at the game.  Since the Preds were playing the Washington Capitals (the best team in the NHL), we had low expectations.  We were pleasantly surprised that the Preds WON!  So we walked to dinner after the game.  We ended up in an English Pub.  Three orders of fish and chips and one lamb burger.  I had the lamb burger, and it was delicious.  I also had Brussels sprouts.  I'm pretty sure they were sauteed in bacon grease, but I like them any way I can get them.  I like pretty much all veggies.  I don't care for mushrooms, but technically, they're a fungus.  It's a texture issue.

So, another social day.  Tomorrow, it's all about laundry and the remainder of grocery shopping.  Man cannot live on Trader Joe's alone.  I mean, maybe some man could...if he were rich and didn't mind having to stir his peanut butter every time he used it. Personally, I like Peter Pan, Jif, Skippy...


Next week is another slow week at the office.  I'm frankly exhausted by having too little work.  I'm sure as soon as it picks up, I'll be bitching about that, too.

It's going to be a cold night, and I bet I'll sleep really well.  Because after all the people time, sleep... that's where I'm, to steal a quote from The Simpsons, a Viking. 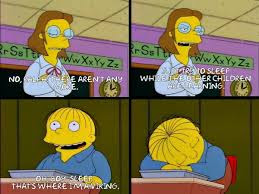 Keep on trucking, y'all.