Here's how I know this.  My company has a Toastmaster's Group.  And I think that's great.  I don't especially want to participate because I feel pretty confident about public speaking.  I do it a lot.  So, I'm all for it, I'm just not an attendee.

That said, they put this poster up in the lobby: 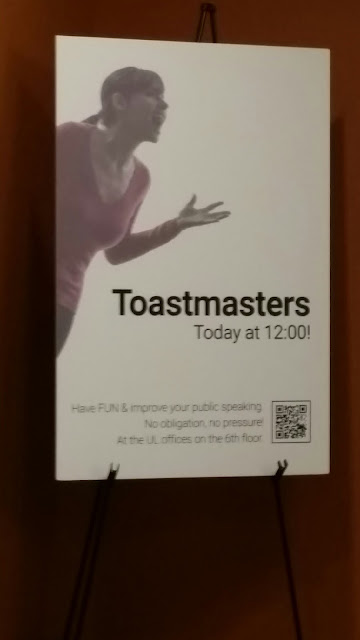 So you know, what I want to do is this:


So, that makes me an asshole.

Here's another thing about me that makes me an asshole.  Whenever I'm inconvenienced by a traffic jam due to an accident, I think, every time, "This had better be something major.  I better not be sitting in this shit for two morons who had a fender bender and didn't know how to move over to the shoulder of the road."

I'm not saying I want people injured.  That's really shitty.  I'm just saying I want to see some twisted metal, scattered glass.  I actually sat in traffic last Friday for an hour because a tractor trailer went off the road in epic fashion.  The cab was crushed and scattered all over the shoulder.  The trailer was upside down.  I suspect the driver was killed.  And I hate that, but it certainly makes sitting on I-24 a little more understandable.  Like I said, I don't want people hurt, I just need to see some actual damage to the cars.

Sometimes I spit my gum out the window.  I interrupt people. I eat smelly food at my desk.  I mean, it smells *good* because I'm a good cook.  I did recently eat a Subway tuna sandwich at my desk.  I swear a lot, and sometimes in front of kids and old people.  I take forever to mail back Netflix movies.  In my defense on that one, who still gets movies?  Why can't we just stream things?

Sometimes I will pretend I don't hear people talking to me when I have my earbuds in.  Sometimes, I'm not even listening to anything.  I have hit the close button to avoid sharing an elevator with someone.

I rarely tip my servers at Sonic, even though they cheerfully deliver my morning 99 cent Coke Zero or Unsweet Tea.  I don't tell people I'm going to Atlanta so that I don't have to go visiting.

I once snapped at a cashier who was manhandling some of my produce.   When I was in 7th grade, I made a girl cry when I said heaven isn't real.   In High School I dated two best friends SIMULTANEOUSLY.  Oh, yeah - I was bad ass.

I have some good qualities, but that's not what today's post is about.

It's about the fact that sometimes, I'm an asshole.  And I'm OK with that.

Christopher said…
If your goal here was to make your readers wish they worked with you mission accomplished.
Seriously, the place where I work needs more people who would desecrate a poster with a flying penis.
To be clear I'm not saying you did.
I'm saying that if a flying penis suddenly appeared on that poster and some people suspected you I'd say you were at your desk eating durian fruit the whole time.
And who gives a tip for a 99-cent Coke Zero? I've tried Coke Zero. They should be paying you to take it.
February 23, 2017 at 10:22 AM