Choose Your Own Adventure

on February 28, 2017
This morning, my friend and interim manager, Jim, messaged me that I had failed to let him know it was Fat Tuesday.  He then said I had not supplied paczkis for the day.  They're Polish jelly doughnuts, essentially, and they are a big deal on Fat Tuesday up in Michigan, from whence cometh Jim.

So, at lunch, I made a side trip to Kroger, who had them last year.  No dice - I went to a suburban Kroger - gotta go urban for the ethnic stuff.  Publix was also no dice.  So I punted and got him two jelly doughnuts from Dunkin.  But as you know, presentation is everything: 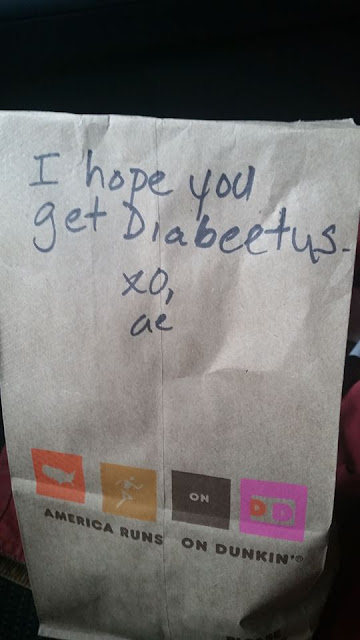 I actually wouldn't wish the Die of Beaties on anyone.  Jim appreciated the gesture, if not also the doughnuts.

The thing is, in most of the south, Fat Tuesday and Ash Wednesday aren't that important.  We don't have a large Catholic population - at least not in the suburbs of Atlanta - my Catholic friends were, by and large, transplants from "up North".  In the South, Lutheran is about as exotic as it got.

I'm not counting New Orleans or Texas in this, by the way, because they're outliers.  The folks in Louisiana do Fat Tuesday up big.  I was in Houston one year on that Tuesday, and it was big there, too.  So, there's that.

The other adventure today was the office Blood Drive.  Last attempt, I was deferred for high blood pressure.  Everything was under control today, so they tagged a bag for me and I hopped up on the table.  The woman set to draw my blood couldn't find a vein in my right arm, so we switched sides.  She then struggled with my left arm, and eventually drew on it with a marker.  Then she had her boss come over and check.  He found a better vein within seconds.  She said, "It must have moved..." Yeah, I should have requested that he stick me.  But I didn't.  She obviously didn't hit a vein, so he had to come over and move the needle around in my arm til he hit the vein.  I mean, come on, lady.

Yes, it hurt.  I didn't cry or yell.  I just sat there and hoped my bag would fill fast.  It did. Little Miss Stick-And-Fail never came back over.  Some other technician removed the needle (it hurt coming out, too), and bandaged me up.  I didn't even stick around for juice and a snack.

Thankfully, I've been a blood donor for 25 years, and today was the exception, rather than the rule.  I would be concerned, though, if a first time donor had that experience.  I suspect it would also be their last donation.

So, this diet that I'm on. Even though it's high fiber, it's bloating me out in a big way.  I think I need to add some healthy fat and some more water.  Get everything moving.  Not to be indelicate, but if you have any home remedies for that - post them in comments.  I've already tried prunes and coffee, so...yeah.

And on that pleasant note, time to finish out my afternoon.

Christopher said…
Congratulations on being a blood donor for so long. And belated happy Mardi Gras.
One year a co-worker brought in a King Cake. Now there's a recipe for diabetes: sugary cake covered with rainbow colored sugar and drizzled with syrup with powdered sugar on top and the whole thing is served on a bed of sugar.
Maybe it's not that bad. But trying it I understood why Big Daddy in "Cat On A Hot Tin Roof" was so big.
March 1, 2017 at 8:56 AM