on February 27, 2017
The healthy eating plan continues.  I have to say, tracking what you eat every day really helps you prioritize.  In my case, that means protein over carbs.

But frankly, diet talk is boring.  I'll leave it by saying it's working, and I'm not suffering, but I did text my best friend tonight to tell her I'd like to get naked and roll around in Easter candy.

So there was an accident on the interstate tonight that necessitated my taking back roads home.  It wasn't entirely a bad thing.  I got to see some different stuff, including a tiny sliver of moon in the night sky.

And since dinner was just grilling some pre-marinated chicken tenders (the Curry Tenders from Trader Joe's - they are excellent and I highly recommend them), and a few microwaved Indian sides (also from TJ's - try the Channa Masala), I still had dinner on the table by 6:45.  And by on the table, I do not mean that literally. We rarely sit at the table for dinner.  I fought this for awhile, but I'm not going to win - we're eat in front of the TV people, I guess.

Anyway, I had to run a quick errand after dinner, and now we chill.

Piper is destroying an off-brand Kong like toy.  I was probably dumb to buy it, but it was convenient, and I can't find her Kong, and... fine.  I'll go to PetSmart on my lunch tomorrow.  I also need to go to the bookstore. Yes, I could just order it on Amazon, and... hmm... maybe that would be better*.  It's hard to get more than one major errand done in the hour - and I'm going to attempt to give blood tomorrow at the office blood drive.  I am feeling O Positive about that (a little blood donor humor)

I am not busy at work.  My (interim) manager knows this and has advised to just do what I can and he'll throw whatever he can my way, but he needs to spread it over all the other trainers.  It's fine, but I'm aware that I may be one of the few people who isn't busy right now, so I'm trying to keep a low profile.

The big question right now is... who will my new manager be?  We were told that there were three internal candidates - I don't know who, though.  I do know the one external candidate was the former colleague of a few people at our office and they seem to like her.  So, I think we'll be OK no matter what.  And, as I've said on more than one occasion, "If you don't like your manager, just give it six months."  And I wish I were kidding - but we all know I'm not.

I had a dream last night that my sister was polling various family members about their favorite primate.  And she kept saying, I know yours is the chimpanzee, and every time I'd correct her and say, "NO!  It's the macaque!"  I woke up to the alarm while having this emphatic macaque dream.

It's actually not the macaque.  They're lovely, but I actually like this guy the best: 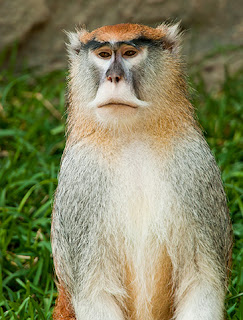 The Patas Monkey.  I saw one at the zoo in NOLA, and I watched him, and he watched me for a good ten minutes.  He looked at me as if to say, "I know everything you've done, and it's not nearly as bad as you think".

He had longer "whiskers" than this guy, but same basic idea.

I also fell in love with Nutrias on my NOLA trip. 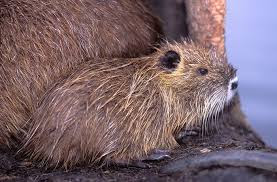 I'm sure they're not cute to the people who live in New Orleans and deal with them as a native species, but damn, they were cute.  Like an otter and a beaver had a baby, and their baby married a large rat, and they had babies.

Anyway, I'm rambling.  I need to go make lunch for tomorrow.  Leftover curried chicken to be turned into salad.

ae
* I totally ordered the book on Amazon. It will be here Wednesday. Kaboom!