After all, if we have learned anything from years of therapy, Dr. Phil, Weight Watchers and inspirational magnets, you can't control situations, but you can control your reaction to them.

So this morning, I got word that my manager resigned.  For those who know me or play along at home, this particular manager lasted, what, two months?

Just like the boss who resigned two months ago, this one is saying, "I wasn't looking - this opportunity fell in my lap".  I have to think that either that's bullshit, or I'm incredibly unfortunate.  I've never had a job just "fall in my lap".  And I'd like to think I have a reasonable amount of talent/skill/charisma/networking acumen.

But every job I've gotten, I've applied for, researched, put on a suit, practiced sample questions, given firm handshakes, and prayed to the Hiring Gods to get. And for every one I've gotten, there are dozens I didn't.  Including one where I was one of three final candidates and never got a call.  I still think about calling them now, nearly 20 years later to see if they've come to a decision.

I'm depressed because I feel very stuck.  I am now, at a decade in to my tenure at this company, going to have to adjust to a new manager who has his (or her, but let's be real, his) way of doing things.   And the thing is, I have no desire to say, "You know, I think I could take a stab at this".  And even if I did, I'm sure I'd get shut down immediately.

One of my concerns, warranted or not, is that I'll be assigned to report to my best friend in the company, and that would be a bad, bad thing.  For me, anyway.   I'm sure he wouldn't be too thrilled with that either, but I'd woman up and be amazing.

Look, I'm going to woman up and be amazing regardless.  But I'm sick.  I've been sick for 19 days, and I just started antibiotics that make you well by KILLING EVERYTHING INSIDE YOU, which makes you feel terrible, then eventually, better.

And I am not sleeping well.  Or enough.  Today I got up an hour early because I forgot that I had an extra alarm set for LAST Thursday that I didn't need for today.

And I'm trying to eat better, but nothing tastes like anything, and you know, when you're on antibiotics, you have to think about your sad little digestive tract, and whatever.  And I can't drink while I take them.  Or take any illegal substances because, they're illegal and my company can test if they want to, and I'll be damned if I lose my job over a joint that I used to relax because my job is stressing me out.

All I know is, I'm kind of setting the table for Pity, party of one.

And that kind of feels like cake should be involved.  Or ice cream. 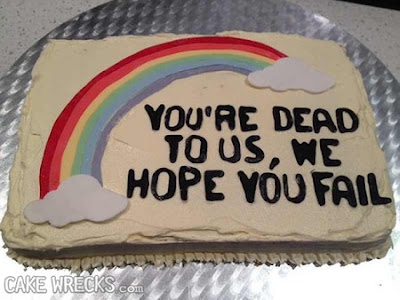 Love you, mean it.

*Guess what - things still get to me!