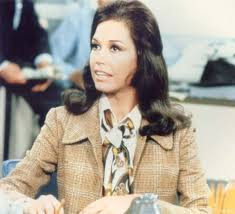 I grew up watching her on The Mary Tyler Moore show.  Now, the show ran for seven years, three of which I wasn't alive for.

But, I grew up in Atlanta where we had the WTBS - the Superstation - Channel 17!  And that was where I got my early education in the sitcoms of the 60s and 70s.  We watched plenty of Newhart, Mary Tyler Moore, Carol Burnett and so on in syndication.

Mary, Carol, Marcia Wallace, Suzanne Pleshette - they were paragons of what a modern woman was.  And what I wanted to be.  Especially the funny part. I knew I'd never be June Cleaver,  but I thought I could probably be Emily Newhart. Or Sue Ann Nivens.

Look, plenty of people have written, will write about MTM and what a positive influence she was on American women.  Better and in more depth than I can or will.

What I learned, although I didn't even realize it at the time, was that you could be a successful woman, have your own apartment, cool clothes, great job, kooky friends - and you didn't have to have a man.

Now, she also showed us via The Dick Van Dyke Show* that being married and a mother didn't suck, either.

Mary was the woman we all kind of wanted to be.

But I was a little more Phyllis/Rhoda.  And even then truthfully, I was more Brenda.  But hell, even Brenda became Marge Simpson, so, you know, it's all good.

She lived a long, successful life.  She had a lot of sadness, but she also did a lot of good.

And she has quite a legacy.

Instead of posting a clip from Chuckles The Clown's funeral, which seems to be the go to - I'll go a little more recent.  Still 21 years old, but -  Flirting With Disaster:

I can hear her calling Ben Stiller's biological parents (the Schlichtings)

Find this movie and watch it.  If not for Mary, then for Ben Stiller, Alan Alda and the completely perfect and wonderous Lily Tomlin.

Lily, you better not die on me, dammit.


*I cannot hear the name Dick Van Dyke without auto-translating it as Penis Van Lesbian.  Because I'm 12.

Chuck Baudelaire said…
I love this. Thank gods for TBS, and for local UHF stations that ensured we all grew up with the good stuff, no matter when we were born.
January 25, 2017 at 10:10 PM