on December 06, 2016
My boss' boss and I don't agree on much.  There's one thing we do agree on, and that's that we really like the movie Bull Durham.

For me, it's about young, nearly naked Tim Robbins. 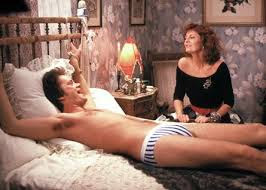 And it's damn funny.  I like it because it's a character study disguised as a baseball movie.

I suspect my boss' boss likes it because it's a baseball movie. Whether he has an opinion on nearly naked Nuke?  That's none of my business.

Anyway, there's a Kevin Costner monologue in the movie where he tells Susan Sarandon and Tim Robbins what he believes:


Kevin Costner has often said he hates his delivery of this speech, but frankly, it's a highlight in a movie full of great stuff.

Anyway, I here are some things I believe:

I believe that kid-sized grocery carts and the ones with giant fake cars attached to them are irritating and should be burned in a large bonfire.

I believe that Oatmeal Chocolate Chip cookies are the best, and Oatmeal Raisin are evil, and that ones where you can't tell the difference until you've committed are diabolical.

I believe that dogs are typically good judges of character, but even the best dog blows it from time to time.

I believe that the ability to write and mail a handwritten note is a dying art, and it needs to be revived.  But, I also think that if you need to write a long letter, typed and mailed is acceptable.

I believe that pantyhose should only be worn for weddings, funerals, interviews, and possibly Halloween.

I believe that soup is the perfect food for when you are sad, as it helps you replenish tears.

I believe that pedicures are worth the expense.

I believe that Mallomars are worth every penny, and that their generic knock-offs are a complete waste of space in the cookie aisle.

To that end, I believe that Pepperidge Farm Milanos are over rated and they've made way too many flavors.  The superior cookie is the Brussels.

I believe that hockey is the perfect sport because your beer never gets hot.

I believe that men and women can both be funny.  See: John Mulaney and Nastasha Leggero, for example.  Men and women can also be unfunny:  See: Rob Schneider and Paula Poundstone as examples.

I believe that there will come a time that people are so conversation phobic that nearly 99% of all communication will be text based.

I believe that it would be better not to eat meat, but it's just delicious.  And vegan?  F that.   I don't want to live in a world without cheese.

I believe that in a country as fat and wealthy as the US, it is unconscionable that anyone goes to bed hungry (unless they're "doing a cleanse", in which case, fuck them).

I believe it's fine if you want to hawk Advocare or Rodan & Fields or Pampered Chef, but it's also fine if you don't post incessantly about it on Facebook.

I believe that parallel parking is a pain in the ass, but if you need to learn how to do it, you will.

I believe that no woman wants a shirt with pockets over the breasts.

I believe that there is more good in the world than bad.  We just need to be open to it.