on November 16, 2016
So for the past three days, I've been dealing with having strangers in my house.

They're here working on the kitchen.  The main guy that has been here I'm going to call Whistling Joe.  Not his real name. 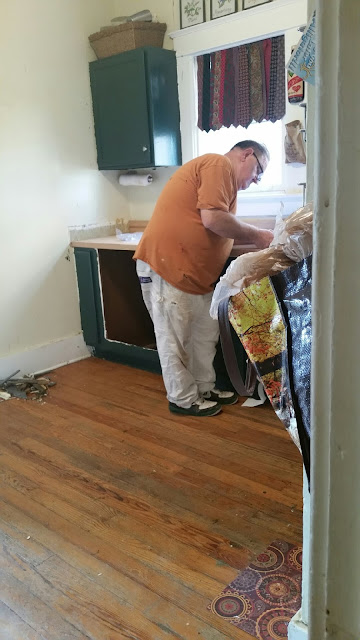 Day one, I found him quirky and delightful.  Now we're on day three and I'm about ready to bitchslap him out of my house.

WJ is a talker.  And not about anything important.  I know way, way more about him than I need to.  He's been married 36 years.  He's from Florida.  He met his wife at a Captain D's (a great little seafood place).  He's an audiophile.  Built his own sound system.  Loves to tinker.  Does a lot of work for "ladies' homes", but given that he owns power tools and I don't - that's fine by me.  Work on.

He likes to chat, and one of his big themes is announcing that he'll be taking a restroom break. The man pees a lot.  Just saying.

When he's not chatting, he is, as his alias implies, whistling.  And not anything specific - there was a brief selection of "Part Time Lover" on day one.  Since then, it's been the same five notes from Beauty and the Beast  - the ones that correspond to the lyrics "Tale as old as time...".  That may or may not be what he's actually whistling, but that's sure what it sounds like.

It has not been an expeditious process.  Day one, WJ was here at 8:30 AM - ready to take on the world.  He removed the counters, the sink, the stove and the dishwasher.  He cut the countertop and he cut the backsplash.  It was a series of first downs.

In the two days that have followed, it feels like it's been nothing but 3rd and Inches.  If you'll excuse the football speak.

Yesterday, I was ready for arrival between 8:30 - 9:30, which is what the woman at the office had told me to expect on Monday.  Monday, as it turns out, is first impressions day - when they lull you in to a sense of security.  Tuesday is a whole new day.  Two electricians came at 10, to make notes about the work that they were going to actually do a different day - tentatively Friday.  Given that this is a five day project, let's firm up tentative, OK? The construction team was...not here yet. I called the office and was told they'd arrive at lunchtime.  Sure enough, they arrived around noon - did a few hours and knocked off.  Larry came with friends.  Casey and Jeremy - Casey made notes on some things that they would need to bring for Wednesday, and they left.

Today, I finally called the office around 11:45, and they said around lunchtime.  So, 1PM, here comes WJ, ready to rock and roll.  At the moment, he's on trip #2 of the day to Home Depot.

And now, this five day job is leaking into next week, and that, my friends, isn't cool.  Not at all.

But, I gave them a key for a lock box, and we'll make it work.

The moral of this story, folks... just be satisfied with your old janky kitchen.  New is not better.

I'm sure I'll come around.

Chuck Baudelaire said…
Just tell me you're not covering up that floor. And that you're getting quartz countertops, not granite. The Property Brothers are all about quartz countertops right now.
November 16, 2016 at 6:26 PM