on September 06, 2016
I was going to write a long post bitching about all the horrible stuff I had happen to me today.

But then I got a phone call from a friend who is having a hard time and needed some advice.   At which point, my horrible stuff was suddenly not horrible.

This is a friend, who, if you asked me to put together a list of people who have their shit together and would never need MY advice - well, he'd make the top of the list.

So, the thing is, you never know.  People who seem to be doing fine sometimes aren't.  And people who don't feel like they are doing very well, may have more to offer than you'd imagine.

The world is a weird and funky place.

That said, I did have kind of a botched day.  I'll ignore, for now, the fact that dinner was weird and the server was totally rude.   Although it was/he was.

I'll even pass over the fact that I tend to get ignored by sales people sometimes and that's irritating as fuck.

I will briefly say that I had some issues with parking today which made me run late to the client site.  Well, technically, I got there on time, but there was no parking, so they directed me to a lot three blocks away.  And in my rush to park and get to class, I rubbed a huge raw spot on my heel.  Thanks, cute shoes.

And I will say that their computers were all jacked up.  And then we had a fire drill, and that one of the nurses glared at me the entire class.  And that they had twice as many people in the class as they were contracted for.

I was able to take a call from a friend who needed someone to talk to. I might have even helped a little.

And I have shoes on my feet, and a job where I get to try and teach people things to make their jobs easier, even if they hate me for it.

And even if the waiter neglects me, I have food to eat.  And even if sales clerks ignore me, I can buy presents for my friends, my dog, myself.

And I have friends.

And if all else fails, I have myself.

And none of that is bad. 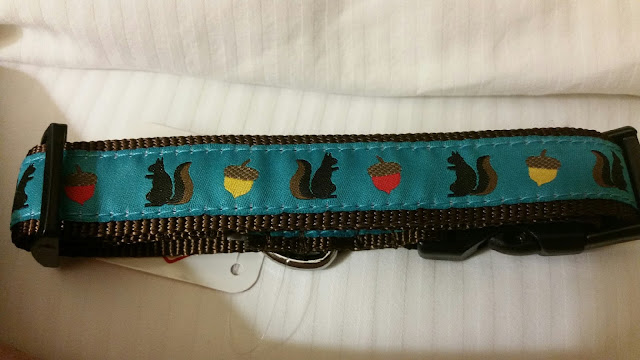 Piper gets a new collar.  Which is one of the great things that came out of today.