on September 26, 2016
Here are some rando thoughts I'm going to share.

1.  Several of my friends are posting that their kiddos have gotten parts in their local cast of The Nutcracker.  You know, I have never seen it performed.  I remember seeing maybe a little on PBS as a kid, but I've never been to a live performance of it.  I'm fine with that.  I've sure seen a number of versions of Dickens' Christmas Carol (including a terrible one that I was in as a HS Frosh).  I don't really feel like I've missed anything.  But you know, good for them.  Here's the question though - is there a specific choreography that every performance of The Nutcracker follows, or are there some some basic guidelines and each one looks a little different?  I never took ballet.  I took a single clogging class in Elementary School, which I hated and was terrible at.  And Modern Dance in college, which I hated and was terrible at.  So, crack on, little dancers.

2. You know those little tiny shopping carts that some stores thoughtfully put out for kids.  I hate them.  Haaaaate.  Trader Joe's has them, and if it were up to me, I would take them out of circulation during peak hours.  The kids don't pay attention, their parents don't pay attention - it's a disaster.  Well, it turns out, it's not just me.  Target recently piloted tiny carts in a handful of stores and pulled them after faced with a resounding "NO".  Read about it here if you like.

3.  More grocery store fun.  I was at my local Kroger yesterday and one aisle ahead of me the entire trip was this kid who had an endless vocal loop that sounded like this:

He would do this five or six times and finally...

Mom: Gabriel, hush!  You're not getting an icy pop.

I would have gladly bought the kid a dozen icy pops and plugged his noisy piehole with them.  Again, turns out,  it wasn't just me.  About 1/3 of the way through my trip, this guy next to me muttered to himself, "Dammit, lady, answer your f***ing kid."  Agreed.

4. After a hiatus, my Sorority Rush dream is back.  This one had me marching in a parade so that various organizations could decide whether they want me or not based on one quick glance.  This may or may not parallel some reality.

5.  Why is it so damn hard to get an appointment with a dermatologist?  I need to do a skin check and get a mole evicted.  I called last week and my options were November 29th or February.  Neither of those really work for me. So, I passed on the November date, which I know I will regret.  But seriously, is there a shortage?  See also:  Dentists.

6.  If you didn't go to a specific college, why are you so fucking invested in their football team?  I work with a large number of University of Tennessee fans all of whom DIDN'T go to UT.  I *went* to Georgia and I give only the tiniest fuck as to how they did this weekend.  They lost.  UT won, which, good for them - but here's the thing - who gives a shit?  Like, invest some of that fervor into something that matters.  The environment.  Human trafficking. Raising minimum wage.  Granted, these are the folks who would likely channel that fervor into closing women's health clinics or Klan meetings.  So I guess I can live with orange polo shirts as far as the eye can see.

7. One of the offices in our complex is bringing food trucks in on Fridays in October, and that's amazing.  I love a good food truck.  I think it would be amazing to have a job naming food trucks.  I could totally do that.

8. I keep a lacrosse ball at my desk, and I am currently using it to de-knot my right scapula.  That and a steady dose of Key & Peele, John Mulaney and showtunes are what's keeping me motivated today.

9. But clearly, not that motivated, because I'm blogging....at work.  This is because I truly have nothing on my calendar today.  But my company values chair-warming presenteeism. So here sit I, warming my chair like a champ.

10. I turn 42 in one month and one day.  I don't feel old, but I know that I look old to a ton of people younger than me, but I look in the mirror and I don't hate what I see.  Not at all. I mean, one mole that needs to go, and maybe I could use a little botox, but whatever.

11.  One of the bossmen here just became a grandfather at age 45.  Which seems ridonk.  We're basically the same age and he has not only a child, but a GRANDCHILD.  I still feel like a spring chicken. 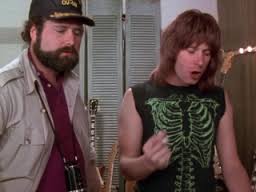