My father and Aunt Mary had a cousin named Walter - he was the oldest son of my grandmother's older sister.

Since my grandmother didn't have kids and was a bit younger when Walter was born, he became something of a plaything to her.  And she always had a special bond with him.  More than with her own children, in some ways.

When my grandmother died, we were cleaning out her house, and it came to Dad and Mary's attention that she had a huge portrait of Walter in her bedroom, flanked by medium-sized one of Mary, and a small one of Dad.

This irritated Dad to no end.  And when we got home, we found Mary had put the portrait in the trunk of Dad's car as a parting gift.

Game on.  A month later, he wrapped it and gave it to her for Christmas.  The following year, he received it in a bigger, gaudier frame.  The next year, Dad had a copy of the picture made into a jigsaw puzzle and put it into a candy box.

The following fall, Mary called to see if I could lay hands on a copy of the photo while my parents were out of town, as she had plans for our Christmas party.  I said sure, and promised I wouldn't tell them.

We wore them to the party.  Once we arrived, we learned that Mary had made napkin rings, tree ornaments, and had frozen his image into an ice bucket used to house the aquavit.

The last time Walter made it into a celebration was my bridesmaids luncheon.  Mary hosted it, and the invitation included a thumbnail of the picture on the back of it.

When Dad died, I remember joking about whether Walter would make an appearance at the funeral... he didn't.

This past weekend, my oldest cousin got married, and Mom and I were discussing wedding presents - he and Michelle have both been married before, so no registry.  I suggested a large framed portrait of Walter, but we didn't have one...

So, at the wedding (which was 60s themed), after the dancing got started, my cousin presented the family with these: 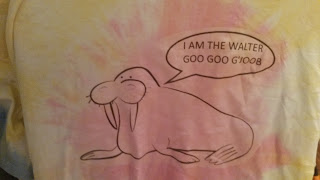 The groom felt that the wedding needed a little Walter.  Goo Goo, G'Joob.

Walter, by the way, is still very much alive and living in Virginia (last I heard).  He has not been present at any of these proceedings, but my Aunt Mary tried to explain it to him, once.

Walter or no, it was  a lovely wedding: