So, I'm sitting on an airplane that should have taken off three hours ago.

By all rights, I should be about 30 minutes from landing in Nashville.

In theory, I have a 7am flight tomorrow on Southwest. And if I were a smarter woman I would have just sucked it up, gotten a room at the Airport Hampton and stuck to that plan.

To be clear, I am not a smart woman. I wanted to go home. So I sprung for a cheap fare home on a different carrier. Which was delayed 20 minutes when I hit the gate.

And then it was delayed another hour.

And then, I got in line to rebook the connection I was going to miss.

And then we boarded the plane. And the later flight to the same destination boarded at the gate right next to ours.  And took off.

And we sat. While a storm rolled in.

And now we have been sitting for an hour.

I might not miss my connection, though... that airport is closed as well.

This job is killing me. Death by 1000 papercuts.

I should have been patient. If Neal Page in Planes, Trains and Automobiles hadn't tried to catch the doomed flight from New York to Chicago, he would have gotten home the next morning.  He wouldn't have had the adventure with Del Griffiths, but that isn't the point. 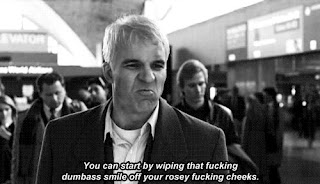 I would take a Xanax, but I need to keep my wits about me. And more importantly, they're in my checked bag, under the plane. The plane where I am being held hostage.

By American Airlines, who got a few hundred bucks from me because that is how badly I wanted to go home.

I realize that there are far, far worse things happening in the world, but I can't even go there.

Bill the Butcher said…
"they're in my checked bag, under the plane."