on April 27, 2016
I used to share a restroom with a transgender colleague.  When she started with our company, she presented as a man.  As time passed, she began dressing in women's clothing, wearing jewelry and makeup.

And then, one Friday, she left the office as Aaron, and returned Monday as Erin*.

The gossip mill had already been churning, and I had heard it was coming.  We had all talked about it ad nauseum, and a male colleague asked me about how I would feel sharing a bathroom with a biological man.

I told him I didn't care because of the stalls. 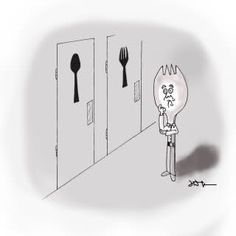 But the first time I saw Erin in the ladies room, I was surprised.  I'm sure I looked visibly surprised.  But I recovered, smiled, washed my hands and left.

I would see her a number of times in the bathroom over the next couple of months, and then she left the company.

I never felt assaulted or concerned or violated.

I don't hang out in the bathroom.  If I'm in there, I have business.  Ok, occasionally, we'll linger there to talk away from the general work population, but for the most part, if I'm in there, I either need to eliminate, or occasionally cry in the privacy of a stall.  That's it.

I don't care what Erin's parts are, or who she likes to use them with.  The only time that would matter is if I wanted to date Erin, which I did not.  She was married, anyway.

So, I guess what it comes down to is this.  Transsexuals need to pee just like everyone else.  And sure, Ted Cruz, they could just "do that at home" - but sometimes, even if you went before you left, you have to go again.  That's biology.  Does it how they pee?  No, I don't care.

But someone who struggles with their gender and just wants to go out without the fear of wetting their pants?  Not disturbing.

People who have a problem with those folks?  Disturbing.

*Not her actual names, but you get the idea.