on March 23, 2016
When you lose a loved one, and you're not religious, there's not a lot of ritual to fall back on.  You don't sit shiva or say a rosary, or light a candle.

But I wanted to somehow mark the second anniversary of Dad's death.  I mentioned wanting some sort of ritual to my mother and said, "I considered making his meatloaf, but... I don't really need to eat that."

A quick sidebar - I mastered my father's meatloaf recipe.  I made it for him about two years ago, and it ended up being the last real meal he ate before he died several days later. It's Italian-esque; with fennel seed, oregano, etc - it's like eating a slice of a huge, fabulous meatball.  But it's not light.  It is made with ground pork and ground beef and, look - it's fucking delicious, but it's not on my diet.

So, a bit later, Mom called back and suggested I plant something to honor him.  But it's early in the season, and the weather could still stab me in the back. I told her I had come up with a plan, and it was that I'd get some really top notch bird seed and put on a feed for the neighborhood feathered friends.

Dad gave me a bird feeder my first Christmas in Nashville.  I fill it sporadically, and I'm chagrinned, but honestly, it's two things.  One, out of sight, out of mind and two, Piper is a little too interested in eating bird seed.  High fiber.  The less said about that, the better.

Anyway, I got some good stuff at Kroger - a songbird mix.  Cardinals, etc. are supposed to love it.

I thought about getting dried mealworms, but the idea of Piper getting into them, well... nuts and seeds seemed preferable.

So, I filled up the feeder, and I saw one bird on it before I left for work.  This guy: 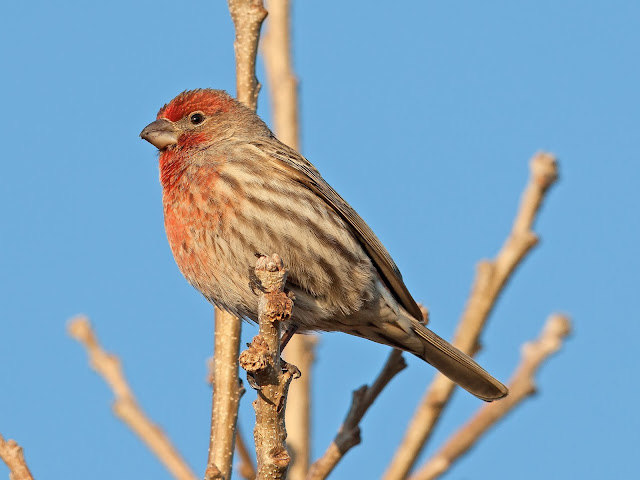 Not literally this exact one, but a house finch. Like this one.

Anyway, that's all I have.  Dumping seed into the feeder wasn't exactly the best ritual, but it was a nice gesture.  And I have a whole year before I have to come up with a better idea.

Maybe I need to stick with meatloaf.