on February 11, 2016
I went to see a pulmonologist yesterday to basically convince him I need a sleep study.

I did a home study a few years back that was borderline and the doc said, "Lose weight."

But I'm still waking up exhausted, so...

I met with my new doc.  He looks a little like Ray Romano, but with a bad hairpiece.  Attention, dudes.  If you are going bald, just go ahead and go super short.  It looks better. 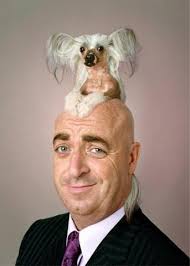 Anyway, super nice doc who wants to get me a CPAP.  Like him already.

So I've got that going for me.

But he was really helpful.  And then he said he was going to show me something really cool.  He picks up a microphone next to the laptop, and starts speaking into it.  He's transcribing with voice to text.

So, I work in medical clinics, and while this is a neat trick, it's not uncommon.

It's so not uncommon that I ask, "Are you using Dragon?"

Dragon is the premier med transcript voice to text software.

He was thrilled that I was in on it, and we talked electronic medical records for a few minutes.

So, United Health Care willing, I have a sleepover at the hospital next month.  If United is unwilling, I'm getting another home study.  And I will be Googling ways to game a home study.

*I just checked, and the doctor was right -  I am technically no longer morbidly obese.  I'm merely obese.  Next stop, overweight.

Bill the Butcher said…
"Super short" doesn't work. Take it from me. Shaving is the way to go.

Mildly overweight/not morbidly obese women are hot. Take it from me too. At least those are my sexual tastes.
February 15, 2016 at 3:55 AM