on November 28, 2015
So, I survived Thanksgiving.   I missed Dad for the week leading up to the holiday, the whole day of the holiday itself and - oh, hell, come on.  I miss him, daily.  But the holidays aren't the chronic low-grade missing - it's the acute kind.

Point being, I survived.

We went out to dinner, and the food was great.  With a footnote.  I started eating and immediately realized that the "not well" feeling I'd been having all morning was the result of some kind of digestive bug.

So, I didn't keep my dinner long, and to be honest, couldn't eat much of it.

To put it less delicately, I barfed a few times, discreetly in the ladies' room during dinner.

I don't know what exactly it was or why it happened, but the symbolism of my body essentially rejecting my Thanksgiving dinner was not lost on me.

Anyway, enough about my delicate constitution.

Thanksgiving evening, we went to the movies. By then, I was feeling better.  So we went to see Trumbo.  It's not easy to find something that everyone wants to see.  I like fluff - sweet, dumb, but not gross.  And they all live happily ever after.  Mom likes crime, thrillers, war, love - she likes anything that isn't toilet humor.  Matt likes anything that challenges.  Foreign, avant-garde, artistic.  The deeper the better.  Think pieces.

Mom and Matt's Venn Diagrams have plenty of overlap.  For me, there are small slivers.

But Trumbo had enough for everyone.  And we all really, really liked it.

Dalton Trumbo was a real man living during the Red Scare in the 50s and 60s.  He was a screenwriter in Hollywood, and was called before the House Un-American Activities Committee for being a communist.  And he was, and by the way - there's nothing wrong with that.   Anyway - he was called to testify and was held in contempt of congress for not bending to their will. He was jailed and blacklisted.  He wrote under a fake name, several of them, actually - and he eventually worked his way off the blacklist - until eventually, people realized that the HUAC Hearings were essentially a witch hunt.

Something similar happened to Charlie Chaplin - he had pissed off America time and time again with his political movies.  Rather than blacklisting him, they banned him from entering the country.  He did come back, in the 70s to accept an honorary Oscar.  And then he died.

Trumbo finally got credit for two movies he wrote under assumed names in the 70s.

Anyway - Saturday night, we went to see a show downtown.  It was put on by Dad's Garage, an improv theater I studied with in my 20s.  It was called Merry #%*!ing Christmas, and it was filthy, funny and fast-paced.  We laughed for two hours.  They were terrific.  The plot is too convoluted, but basically, a single father, Scrooge, Frosty the Snowman, an orphan and Santa battle it out over nuclear winter, the search for self and the real meaning of Christmas. 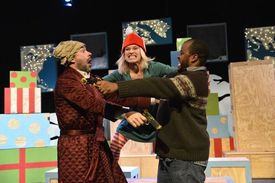 And I have just a day and a half before I start the first of three work trips til I hit the end of the year.

Bill the Butcher said…
I probably should watch all the films I've downloaded right on this damned laptopbut haven't watched. Hell!
November 29, 2015 at 3:19 AM