Spice is the Variety of Life

I haven't done a move with anyone since my own move as a first time home buyer ten years ago.   Well, that's not entirely true; I've moved office buildings a few times.  But in terms of moving into/out of a domicile?  No.  Not in a decade.  Although, ten years ago, I did it twice in the same year, which was... whew.  Yeah.

Anyway.  Jim had himself and two young, healthy men to help with heavy lifting.  He was also really organized, and had just about everything ready to go - but he left me the kitchen to pack.

There's something very personal about kitchens.  Like, why does my friend have so many jars of maraschino cherries?  Which spices does he have?  What will he buy generic and what is brand name?  Does he own any weird gadgets that I should consider buying?  Is there something he needs that I should get him as a housewarming present?  Is keeping the condiment packets from fast food places a guy thing?

I did end up asking Jim about the cherries.  They were from last Christmas, when he planned to make a recipe of his grandmother's (for some cookies), but never got to it.  A likely story.

Anyway, it was a fun day, we all chatted and moved boxes, helped unpack, laughed and of course celebrated Jim's big day.

The kid(s?) that lived there before wrote on doors around the house.  Bible quotes on what was the closet in her room.  And in the garage, this: 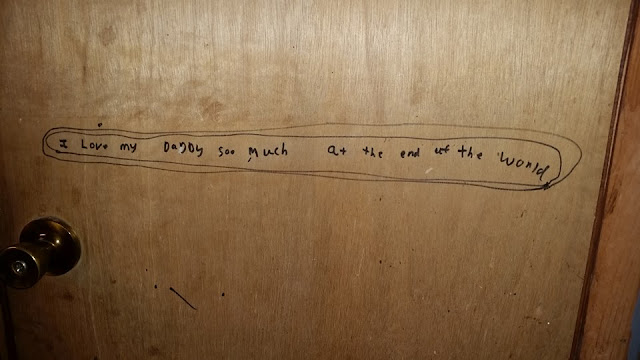 Bill the Butcher said…
That almost sounds like the beginning of a horror/fantasy story. I can almost imagine Stephen King writing one, and ruining it like he ruins everything else he writes with gratuitous overwriting :/
November 8, 2015 at 12:28 PM

Unknown said…
Although, in Bill's defense, the maraschino cherries could be the basis for a weird tale as well.

Granted, if it were a Stephen King book, they would probably just be cherries with an evil spirit inside of them.
November 8, 2015 at 4:52 PM