There is never a time that the word "panties" won't make me giggle, even if it's just in my mind.

I finally got caught up on Project Runway.  As pro-plus sizes as I am, I thought Kelly's collection was waaaaaay better than Ashley's.  Also, Ashley needs to slow down on the foundation.  Every time she cries, her face streaks.

I need to avoid people who delight in frustrating me.  At the moment there's one in particular who seems hell-bent on making me insane.  And I need to let that shit go.  Or deal with it.  But yeah.

What is up with my digestive tract?  I am mainlining Tums, taking famotidine/ranitidine/jimmydean like it's an addiction.  Also, the amount of methane gas I've produced tonight could power a small isolated village.

We got our Christmas cards back from Costco today.  The printing of the font is a little muddy, but it's OK.  They were $16 for 75 of them.

I think Elf on the Shelf is super obnoxious.  That said, I'd have a ball doing stupid stuff with it, if that were one of three things a day I had to do. 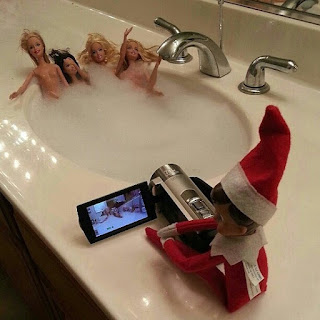 I am completely over it with college football.  I mean, fucks given?  Zero.  That said, a friend of mine posted a video of her daughter, who received a letter of acceptance from University of Tennessee today.  The letter includes a card that, when opened, plays "Rocky Top" - that's kind of adorable.


I'm having one of those weeks (months?) where so many things make me weepy.   Songs, TV commercials, books.

I had the most bizarre sorority rush dream last night, ever.  It was like a Broadway production.  Total insanity.

I don't like Matthew McConaughey enough to stay up tonight for SNL.  I think it's more critical that I get some rest.

I have a haircut scheduled Tuesday.  Much needed.  I wish I had a ton of money - I'd get a mani-pedi, massage and facial, too.