Well, butter my butt and call me a biscuit...

on August 24, 2015
So, recently, I've discovered the joys of cheap massage parlors.  They tend to be, in my limited experience, Asian owned and operated, and they are vaguely seedy.

Dim lighting, curtained off rooms, tables that don't raise/lower.  There are no showers, robes or anything fancy.  Go in your room, disrobe, get on the table and use the provided sheet or towel to cover as much as you can.

But the price is right.  What I'm saying is, it's really a matter of when, rather than if, I get hauled into jail for "soliciting prostitution" - and cleared/released immediately.


This is the sign hanging in the room of the one I went to in Douglasville, GA: 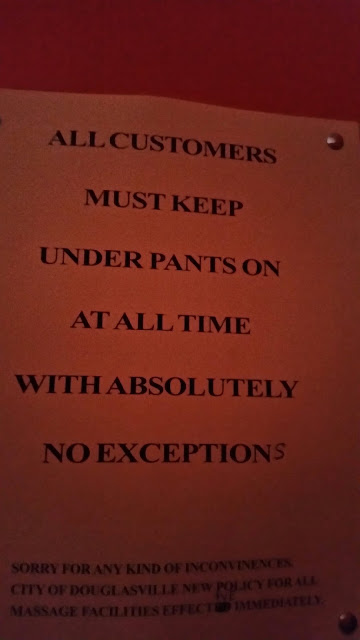 I showed this to my friend Andrew, who asked what happens if you show up without underpants.  I don't know, and I don't want to know.  This lead to a brief (heh) discussion of where one might and might not prefer to go commando.

Anyway - this weekend, I went to one that also had a sign, which I attempted to photograph discreetly, but it didn't turn out.  It outlined a list of unacceptable scenarios which basically said, "We don't do happy endings.  Don't ask.  If you ask, we're going to kick you out and you will still have to pay."

It wasn't that blunt, but that's basically where they were going with it.

Anyway, I have this permanent knot in my shoulder, so I asked for firm pressure.  At one point he asked if I wanted more pressure, so I said sure.  He proceeded to stand on the table and began walking on my back.  It hurt like a motherfucker.  I could swear he had on stilettos. Or had pointed toes...they actually had handrails on the ceiling for him to grab onto.  That's some fucked up shit, right there.

He got the shoulder knot diminished, and my lower back felt nice and loose.

Until the next morning, when it felt sore.  A quick glance in the mirror showed a rorshach test in bruises across my lower back and butt.

It's still a little sore.  I'm not mad at the guy, but I think I'll go back to the first skeezy place I tried.  They had hot rocks.

I ended up making pepper jelly the next day (Sunday) using all hot peppers.  The habaneros tore me up.  At one point, I had to walk outside because I was coughing uncontrollably, and I felt this wave of pain tear through me like I had been dropped 30 feet.  I'm sore from that, now too.

What the fuck?  This getting old stuff is just nonsense.

But the jelly is, as the kids say, ON FLEEK.

Chuck Baudelaire said…
"Paying a strange man to put his feet on my back" is literally my definition of hell. You nailed it. Also, habanero jelly sounds amazing. (And apparently "on fleek" had a really short shelf life as a thing. Precocious Daughter says nobody says it any more. Which means you and I are free to co-opt it and make it fabulous for the post-adolescent crowd.)
August 25, 2015 at 7:37 AM