on August 16, 2015
Last week,  President James Earl Carter - you'd know him as Jimmy - announced that he has cancer in several areas in his body, and that he'll be undergoing treatment at Emory in Atlanta.

So, President Carter may not have been the best president.  I'm a Democrat, and even I'll admit that his time in office was... lackluster.  With the exception of the installation of solar panels at the White House (removed by Ronald Reagan).

But even the biggest reddest conservative would have to admit, Jimmy Carter the man, the humanitarian, is a fine man.  A good man.  He is what I, a non-Christian, would use as the poster child for what a Christian should be.

And the fact of the matter is, he's ninety years old and has cancer.  So, realistically, he won't be around forever. 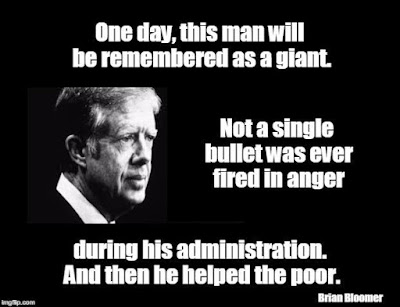 You can't be a Native Georgian without some thoughts on President Carter.  Here are mine.

When he was elected president, my parents took the Amtrak to D.C. for his inauguration.  My mother has his business card framed on the desk in the living room.  She has her invitation to his inauguration framed right next to the one from President Obama.   I found out a few years ago that Kelly and Flora went up, too.  Must have been one hell of a party.

One Saturday, about 15 years ago,  I was at Manuel's Tavern in Atlanta - it is the Democratic watering hole in Atlanta.  They also have a killer breakfast on Saturdays.  Scrambled eggs with Boursin cheese, thank you!

Anyway, I'm there with some girlfriends and two men in dark suits walk in, check out the room and walk out.  It was weird.  So when our waitress came back, we asked what was up.  Turns out the secret service had to check out the place - one of Jimmy's grandson's was having his wedding reception that day.

There is an episode of King of the Hill where at a Habitat build, Bobby mistakes Jimmy Carter (JC) for Jesus.  Hilarious.  And worth considering.

Jimmy Carter helps the poor - he's an advocate for the disenfranchised, and he is a man of integrity. 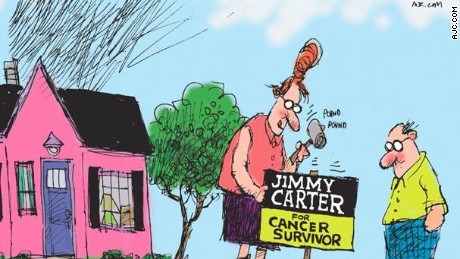 And I hope he can hang on just a little longer, because the world will be a poorer place without him.