on July 14, 2015
So, I went to the University of Georgia.  I wasn't a terrible student.  As and Bs for the most part.  Four Cs in my career there - Statistics, Econ, Weather/Climate, and Playwriting.  That last one was an 8AM class the last quarter of my senior year.  I was dating this guy who was also in the class, and we'd often sleep in and skip it together.  I'm not proud of that, I'm just saying.

I enjoyed my time at UGA pretty well.  At least, in the classroom.  I was socially inept - and even though I was in a sorority, women's glee club, and a j-school society, I felt awkward quite often.

In retrospect, I had more fun than I realized at the time.  If only I had just enjoyed it.

Anyway - two thoughts coming out of my time in Athens, GA.

1.  I've been thinking a lot about my job situation, and the bad feedback from last week.  And I started thinking about Dr. Wenthe.  She taught an intro to advertising class, and it was so compelling that I very nearly changed to an Advertising major.  Her class was just fascinating.  She also used a lot of New Yorker Cartoons.  I really liked her.  The one thing I took away from college and use nearly daily is a concept that she explained as The Law of the Unattainable Triad.

You've likely heard of this concept.  It's not new, and you may call it something else.

Basically, in business - the ideal is that you want something Good, Fast and Cheap.  But you can only have two, at the expense of the third. 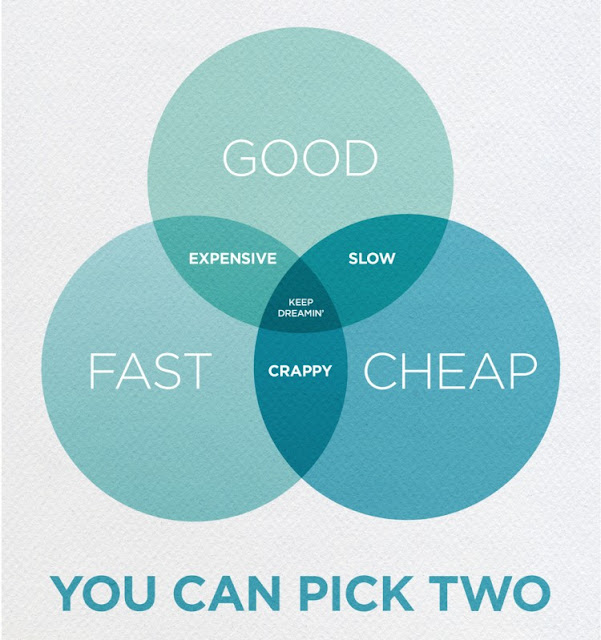 I was thinking of this in terms of my lack of training situation.  They want me ramped up Good, Fast and Cheap.

They went for Fast and Cheap.  Which means I'm not Good.

But we need you NOW.  You need to be Good and Fast.  Well, that's not going to be Cheap.

Sorry, don't blame me - take it up with Dr. Wenthe.


2.   So, the mascot at UGA is the Bulldog.  There is a dude in a mascot suit who attends the games known as Hairy Dawg.  There is also a live bulldog, named Uga. (pronounced ug' uh).  Since the lifespan of the average bulldog is roughly a decade, we've been through a few Ugas. We're on the 9th one, or Uga IX. 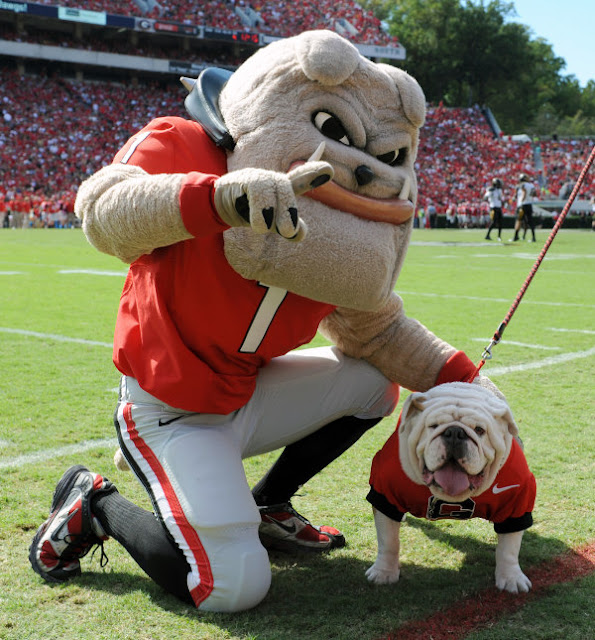 Here's what you need to understand about bulldogs.  They are super cute.  They are also genetic disasters.

Fun fact - bulldogs have huge heads.  They also have little bitty narrow hips.  So that means that puppies are typically delivered caesarian.  By a human.  They also have a hard time mating, so there's some human intervention.

Also, bulldogs are brachycephalic - which is a fancy word for flat-faced.  They have a short muzzle, and a squished-in face.  And it makes it hella hard for them to breathe.  It also makes them heat-intolerant.

Which, I don't know if you've been to football games in Athens, GA in August, September and even October... but it gets kind of hot.  To wit, Uga has an air conditioned dog house on the sidelines, and generally they supply him with lots of ice to lie down on.


Anyway, the final thing I'll share is that the Uga line is kept in circulation by a family in Savannah, and I'm sure they're lovely people, but the fact is, they want this all-white, male bulldog  - and that requires a lot of human intervention.  I'm not saying they're horribly inbred, but I am saying we whipped through Ugas 6-8 in less than a decade.

Number nine has a fair amount of brindle.  He's about to turn 11, so they found his replacement - a grandson: 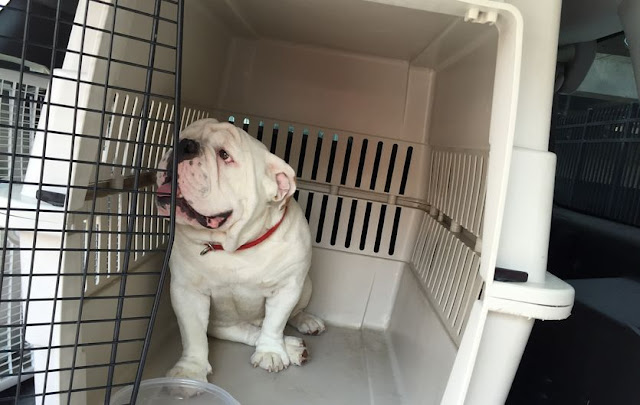 His name is Que.  He's cute as hell, and appears to be pretty much all-white.

The implications of that are staggering from a racial perspective, I realize as I am typing this.  Hold that thought for another day.

The fact is, bulldogs have been bred to the point where they can't survive without human intervention.  Take a gander at this:

That is cray cray.

So anyway, that's all I really had to share today.