On the road. Again.

on June 24, 2015
When I was in elementary school, we went to Music Class once a week with Mrs. F.  She was a lovely, cheerful woman who had us sing, play rhythm instruments and even, on a few occasions, dance.  Mrs. F was really good friends with Mrs. H.  Eventually, they divorced Misters F and H, respectively, and became even better friends.  Ahem.

I remember a ton of the stuff we sang.  There was a text book that we used - Harcourt Brace?  Houghton Mifflin?  Doesn't matter.  I loved it. I think most people tolerated it.

At some point - I'm going to say it was 4th or 5th Grade we learned a song called "Roll on Columbia" by Woody Guthrie (Arlo's Dad? Perhaps you have heard of him?).  At the time, Ban roll-on had a bunch of ads running, and we all made a connection, snicker, snicker.

But I loved the song.  It was about this river, in a place I never dreamed of.  Here, over 30 years after I sang it are what I remember of the lyrics:

Green Douglas Fir where the waters cut through
Down her wild mountains and canyons she flew
Canadian Northwest to the ocean so blue
Roll on, Columbia, roll on.


OK, so there was a second verse that had a line in it about the Yakima, Snake and the Hood River, too.   Beyond that, I don't recall.  Although, I did Google the lyrics and find my memory to be quite sharp, thanks.

We learned, at the time we sang the song that the line about power/darkness that it was referring to hydroelectric power.  I remember learning that in conjunction with the song.  I distinctly remember that I always hoped that in music class, even into Middle School, I always hoped someone would hear me singing, and tell me what a beautiful voice I had.  I don't have a great voice.  It's in tune, and it's not unpleasant. But it's not, you know, heartbreakingly beautiful.  It's nice.  I've gotten solos.  It's fine.

This week I'm back in Pasco, WA.  And guess what river runs smack-dab ass through Pasco? 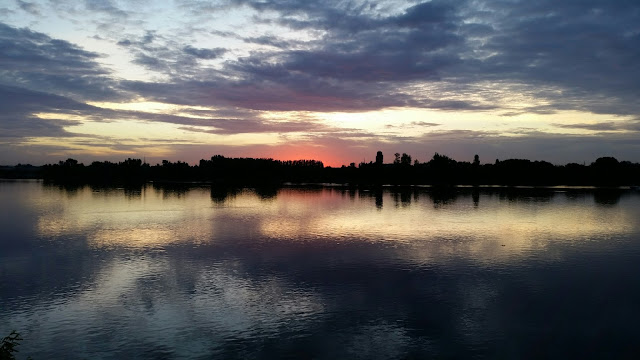 And this, folks, is the view from my room.  Specifically, the balcony of my room.

Because life is too damn short to suffer another night at a sketchy Best Western.

Although in this case, the power turning darkness to dawn is solar, not hydro.

Chuck Baudelaire said…
I remember a disturbing number of songs I learned in elementary school. "Crabs Walk Sideways" has to be my all-time favorite.
June 24, 2015 at 4:10 PM