I assume his name was... Buck?

on May 21, 2015
Occasionally, I read something on the interwebs that I feel compelled to share.

This is that something.

Anyway, there's a flight headed to Jamaica, and they announce it's overbooked, and apparently, that means that this one passenger in particular will not be getting on the flight.

According to the article, he's there in the terminal, in the altogether for about an hour.

AN HOUR.  Just standing around naked.

Finally, security gets him out of there, but not before a number of people get cell pictures.

And I'm not going to lie, if I'd been there, I would have totally gotten pictures. 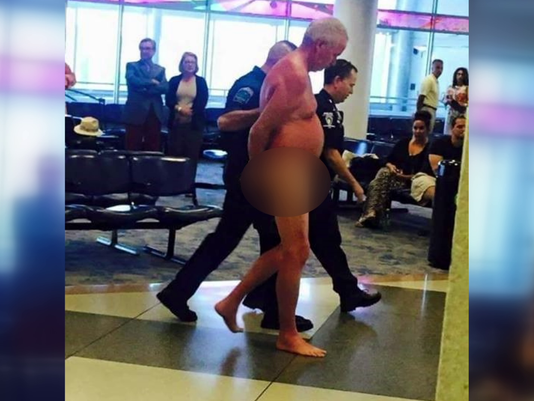 Obviously, I'd have cleaned that smudge off the center of my lens.

They determined that the passenger had stopped taking some meds and was having an episode.

That aside, I think he's kind of amazing.  It's a clear message to the US Airways people, it's essentially non-violent.  We can clearly see he's not concealing a weapon.  He might be sporting wood, but realistically, that's harmless - unless it discharges, and then it's biological warfare, but still...

I think it's just beautiful.  And who among us hasn't gotten so frustrated with air travel that we wanted to send a special "fuck you" to the airline people?

This guy nailed it.  So, Buck, wherever you are, get back on your meds, take a deep breath and get thee to Jamaica.  Have a few Red Stripe and a nice dip in the Caribbean, and thanks.  From me to you.