on February 22, 2015
This is a special post for all my brides-to-be.  I've been married almost a decade, and I wanted to offer you some advice about some important choices you're making.

I'm talking about the registry.

I understand where you are right now - you're surrounded by all this cool home stuff, and they hand you a zapper gun, and you just want to go apeshit.

Here's my advice to you.  Go apeshit.

But I'm going to make some suggestions based on my extensive experience.

You think you want:  a cake stand.

You don't.  You're not going to be making display-worthy cakes just because you got married.  If you needed a cakestand, you'd have one by now.  They take up space, they're a pain in the ass to clean and I've used mine ONCE.  Now it houses birds' nests I've appropriated from our porch (after they were done using them).

What you want instead:  Pyrex measuring cups.

Especially the four and eight cup ones.  The eight cup is perfect for mixing up a batch of brownies.
Get the kind with plastic lids for easy storage of random things in the fridge.

You don't.  I blew it on this one, because that's what I got, and they're nice - but they chip, they break.  I don't know if we have any of our originals left, because I've been replacing them one at a time for the past decade.

What you want instead:  Corelle.  Plain, white, easy, shatterproof Corelle.  We should have kept Matt and my stuff and added to it.  My bad.  Also, it's cheap enough that we could get a new pattern every ten years if we wanted to.  Oh well.


What you think you want:  A KitchenAid stand mixer.  This is the holy grail of all wedding presents.  It says, someone loves me enough to spend the money on this behemoth.  Plus, you get to pick a pretty color.

You do want this.  And whether you "need" it or not, go for it.  You may use it once a year, but it's your right as a bride to register for this.  And someone will get it for you.

What you want in addition:  If you're registering for high-end electronics for the kitchen, may I suggest an electric pressure cooker?  The same woman who gave me my KitchenAid (Matt's Aunt) gave us the Instant Pot for Christmas and I have used it in two months more than I have used the mixer in ten years.

What you think you want:  A nice wooden salad bowl and servers.  For all those gorgeous salads you're going to make.

You don't want this.  Well, you do, but damn if they're not a pain to clean.

What you want instead:  A set of stacking bowls from Crate and Barrel.  Specifically, these: 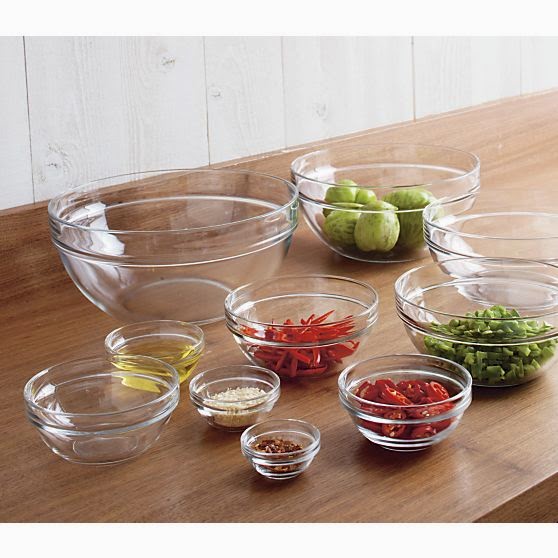 I added these to my registry as an afterthought.  I use them ALL THE FUCKING TIME.  If anything ever happened to them, I would get another set immediately.  They're $30, they're space saving, and they're awesome.


You think you want:  Fancy Barware

You don't want this.  You're going to be drinking out of the same two glasses you got from the Beer Tasting or the plastic tumbler from the Hot Chicken festival.  Buy glasses on an as need basis.  You don't need a dozen champagne flutes.  Not yet.

What you want instead: A decent cooler.  Put some beers on ice, and you have a party.  Plus, they make Solo Cups in every color on the planet if you want everyone to have matchy-matchy drinkware.   Alternately, consider a stainless steel drink tub or one of those big jar-type dispensers.

What you think you want:  A Food Processor.

You probably don't want this.  They're a space sucker, and unless you plan on making your own pizza dough, spaghetti sauce and chocolate mousse on a daily basis... you can wait on this.  It's a good 7th Anniversary gift.

What you want instead:  An immersion blender.  The Cuisinart one is a great baby step to your food processor.


What you think you want:  Microplanes, citrus trumpets, nutmeg graters, and melon ballers.

You do want this.  For one, they're in a thoughtful price-range for showers and your friends who aren't loaded.  For two, you probably do want a few of these gadgets, and this is the time to ask for them.

What you want in addition to this:  stainless measuring spoons, measuring cups and this: 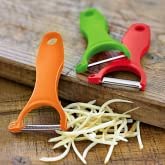 What you think you want:  Cash.

You do want this, but don't ask for it.  The people who want to Honeyfund, Housefund or Fundfund you, will.  Don't ask for money.  Don't include a routing number in your invitation.  Just don't. It's tacky.

That's my advice.  Please let me know if you need specific guidance on items like salt cellars, egg plates and silver patterns.