This is going to get uncomfortable...

It is statistically impossible that I don't know someone who was the victim of a sex crime.

I knew a girl in college who had a meltdown one night when we were joking about something over-the-top stupid, and it triggered something for her, and several girls kind of took her out of the room and tended to her.  I don't know her story, or what happened, or when.

I have a friend who told me casually that she had been date raped.  I had no idea what to say, or how to have that conversation, and so I said something eloquent like, "Oh".  And that was that.  I'm older now, but I'm not going to open old wounds.

So, that's my association with it.

Now, my senior year at UGA, there was a serial rapist who attacked several women, and we were all on HIGH ALERT - and then I graduated and forgot all about it.

So, there are two reasons I bring this up.

The first is that here in Nashville, two Vanderbilt football players were just convicted of raping a female student who had blacked out.

The second is that UVA passed down an edict to sorority women that they are forbidden to attend any Fraternity Bid Day parties this weekend.

Now, I was in a sorority.  I never met any of the UGA football players, but I knew plenty of guys in Fraternities.

Having sexual contact with an unwilling or un-consenting party makes you a rapist.

I went to a number of Fraternity houses in my time at UGA.  I never felt unsafe, or pressured to drink to the point of incoherence.

One of the first rules we learned was that you never go off alone with a guy.  And if you see someone who needs a buddy, be that buddy.  Safety in numbers.

The first time I was invited to a Fraternity house was on a Wednesday late afternoon a few weeks after classes started my Freshman year - a high school friend of mine saw me on campus and invited me to come over to their house and hang out.  What I didn't realize at the time, and in fact, didn't realize until years later, is that he had invited me to be there when they were entertaining some guys for a Rush Event.  I was invited as EYE CANDY!  No, really.  At the time, I was trying to impress the guys at the house, because I wanted to be a good ambassador of my new sorority. They wanted to prove to these rushees that they were bonafide enough to get actual women to come hang out with them. 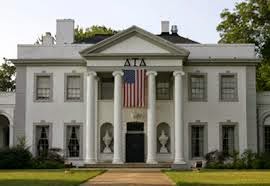 Later that fall, I visited another Fraternity before a social.  These guys were mainly from South Georgia - Agriculture students.  All gentlemen.  They had a house dog, a hound mix named Dog.  Yep.  One of the brothers told me that Dog had gotten parvo the previous Spring, but was "Too stupid to know he was supposed to die."  Dog jumped into the back of one of the pick up trucks, but we ended up not taking that truck.  When we got back hours later, Dog was waiting for us in the back of the truck.

My Junior year, I went to a Pajama Party social with one of our favorite Fraternities.  I learned that night that Prozac and Vodka do not mix.  I remember standing in a corner, talking to a guy who went by his last name because there so many guys named... well, for the sake of anonymity we'll say Dave.

So, this particular Dave and I were talking, and I was half in the bag.  I started kissing him.  I want to state for the record, I was the aggressor.

And that's when my sisters intervened and pulled me away, and took me home.

And because I'm a jackass, I used that opportunity to get a little scrappy with a girl I didn't much care for.  What I said was, "I know you fucking hate me.  I know you think I'm a moral, upright bitch."

It's hilarious that I remember that so clearly.  What was less hilarious was being brought up to Standards Board for behaving like an ass in public.  This girl was trying to make sure I didn't get into something I couldn't get out of.

All of this to say, I never had a bad experience with any guys at school.  And I don't think it's anything I did or didn't do that kept me "safe".

Do I think it's a good idea not to drink til you pass out?  Yeah, I do.  But college kids are going to do that.  It's not an excuse to get freaky with someone who isn't participating.

Do I think it's a good idea to travel in groups?  Sure, but I travel alone and that means I'm eating dinner alone, sometimes at the bar, where they like to seat people who aren't in a large party.  I'm not looking for a good time.  I want to eat my cheeseburger in peace and then go watch shitty TV in my room.

Do I think that girls show a lot more skin than when I was in school?  Yeah, and they're gorgeous, and good for them.  It's not an invitation for you to drag them back to your cave and fuck them.  They just want to enjoy the benefits of being young and free.

And I agree that women really shouldn't be at Bid Night celebrations.  And here's why.  Because they are then seen as the "prize" that the pledge gets for successfully being chosen by this group of men.  You're one of us now, here are your seventy brown-eyed virgins to deflower.

NO.  You joined us, we're going to have your back.  We can introduce you to some nice women that we know.  Like the friends of our girlfriends, or girls we know from home.  But don't do anything stupid, because we value these women, and we don't want to be the Rape House.  Once we know you're not a total DB, we'll let you meet our female friends.

But tonight, we're going to have a few beers, some some cigars (or, whatever), and bro out.

So, does that mean I'm offended that I was eye candy for some prospective Fraternity Members?  Hell no.  Because it was broad daylight, I was seated in the parlor of a nice house where I knew not only the guy who brought me, but several other guys who graduated with my sister. I was there meeting friends of my friend - I thought I was just hanging out and catching up.  There was no beer, no sweaty groping.  I was introduced to one of their Advisors and I remember being really nervous shaking his hand.  I wasn't a prize.  I was guest.  I was dressed up because I had a chapter meeting, and my friend drove me from his house to mine so that I would be on time - and because it had started raining.

This is incoherent.  I'm not sure I have a real point.

The point is, we have to stop telling women, "Here's how to not get raped."


PS - A footnote to the Dave kissing story.  I met a guy a few years ago who was a member of that fraternity.  He was there for that party.  He was Dave's ROOMMATE.  Small world.  He doesn't recall the incident, but I assured him it happened.