Walk right in, it's around the back...

on November 30, 2013
When I was 10 or so, I took it upon myself to memorize all 26 minutes of the Arlo Guthrie Thanksgiving classic, Alice's Restaurant.  Why?  I don't know.  Even at a young age, I had a good ear for prime source material.

And let's face it, if you're Woody's kid, going rogue with a novelty song is probably a sound career choice.

All I know is this - something about the cadence and tone appealed to me, and eventually I listened to a cassette of it enough that I could perform it, word for word along with Guthrie fils.

It would be a few years later that I saw him in concert for the first time - I've seen him either five or six times total, and he never disappoints.

The point is, he's a part of my Thanksgiving ritual, and I need as many rituals as I can get these days.

So, I rode down on the Megabus to Atlanta Tuesday AM because Matt couldn't leave til Wednesday night.

I got to the house, met up with Mom and we went to see Dad at his rehab facility:

"KID.  Have you rehabilitated yourself?"

He was getting some IV fluids and seemed cranky and frustrated.  Who could blame him?

Mom and I went and ate our feelings at a Meat and Three place that is owned by a cousin of Paula Deens.

"Had a Thanksgiving dinner that couldn't be beat, went to sleep and didn't get up til the next mornin'."

Wednesday, I went and spent the morning at the facility keeping an eye on a very cranky Dad.  While he was in PT, I address Christmas cards.

"Yes sir, Officer Obie, I cannot tell a lie.  I put that envelope under that garbage."

It got to be time to go get the turkey we'd order from Copeland's, a place about 10 minutes from the facility.  I also picked up a second pie (because I should have trusted my gut and gotten Dad a cherry pie rather than sweet potato pie from the Sugar Free section at Wal-Mart.  But, hey, two pies.

I went home to get Mom to go back over and see Dad again, when Matt arrived.  He ended up getting the day off and surprised us.

We all went to see Dad and they were having issues with his IV.  So we spent a good bit of time getting that straightened out:

So, we went home after a strange interlude at Waffle House and all crashed.

The next morning, we went to get Dad from the place and brought him home.

"Had another Thanksgiving dinner that couldn't be beat, went to sleep and didn't get up til..."

After he had a nap, we took Dad back to his facility.  He was cranky, frustrated and didn't feel great.  So we got him in, got him comfortable and left.

"And with tears in our eyes, we drove off into the sunset, looking for another place to put the garbage..."

We hung out and recovered from the day and went to bed early.

Friday, Mom and I went to spend some time with Dad, who got plenty of sleep and seemed to be feeling much better.  We brought him some pie (two kinds) and a turkey sandwich.  We left him cheerful, well-fed and hydrated, but tired.

Mom had a party to go to that night, so Matt and I took the beasts for a walk, went to dinner, and did a few little Christmasy things around the house for Mom and Dad.

Specifically, we made a candy wreath for Dad's room: 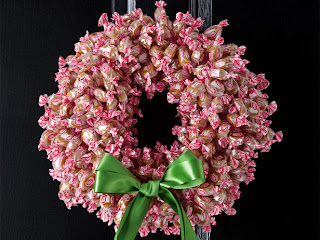 Similar to this, only not as pretty, and made with peppermint disks.

We also put up a tree in Mom's front yard and threw a bunch of lights on it.  Mom was tickled pink.

So, this morning, we got up and Matt and I took Dad a turkey sandwich and two types of pie.

"I walked in, I sat down, got good and drunk the night before, so I looked and felt my best when I went in that morning."

Once again, Dad was bright-eyed and bushy-tailed and doing great.  He ate some sandwich, talked clearly with us for a little while.

"And we had a great time on the bench, talkin' about crime, mother stabbing, father raping, all kinds of groovy things that we was talking about on the bench."

"And the only reason I'm singing you this song is cause you may know somebody in a similar
situation, or you may be in a similar situation, and if you're in a...situation like that, there's only one thing you can do.  And that's walk into the shrink wherever you are. Just walk in say 'shrink, you can get anything you want, at Alice's restaurant.' And walk out."