on November 10, 2013
The nice thing about rock bottom is this - once you hit it, there's nowhere to go but up.

The problem is, you may think you hit rock bottom, but realize you still have a ways to go.

I am now, no contest, the fattest I have ever been.  I could blame it on travel, or Dad's illness, or Lola's demise... but what it really comes down to is that I have been trying to solve life's problems with the almighty calorie.

Every single bad feeling I have, my inner voice says things like "Kill it!  Kill it with gravy!"

I am trying to bury all the crap in my life under a pile of carbs and fat.

So, I kind of had a meltdown/breakthrough about it earlier today, and I realized that hopefully *this* is, in fact, rock bottom, and I cannot go any further down the rabbit hole or up the scale than this.

Of course, I realized that on a full stomach.  As one will.

The fact that I'm coming off a stressful weekend  - a quick trip to Atlanta to see Dad in his new (hopefully super-temporary) rehab facility  - doesn't help.  Lots of driving, lots of eating for speed and comfort.

The fact that tomorrow, I head to Texas and Wisconsin for the week doesn't help.  Lots of eating out in places known for their deep fried, their cheese, their beer.

But.  I want to be healthy.  I'm tired of feeling bad, of not liking the way I look.

I know I can do it, I know I deserve better.

I just need to start.

PS - I believe that "Kill it!  Kill it with gravy!" might be an excellent tattoo. With a gravy boat... if I were into that sort of thing. 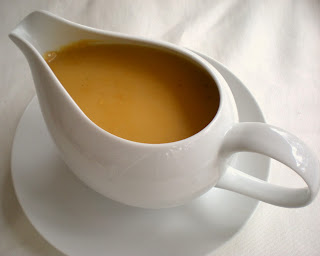 PPS - I will confess to having indulged in something of a "Last Supper" tonight.  But I won't confess what it was.

PPPS - A Shiny Pearl to that nice trooper from the Georgia State Patrol today - and he knows why.