on February 03, 2013
So, good weekend - I de-hoardered the front room of our house.  I still have a lot of work to do - the Butler's Pantry, Dining Room and Attic are all a HOT MESS.

But, I can walk in the front door without dodging a large leather armchair and scads of boxes.

I spent the late afternoon and evening shopping; first at Wal-Mart, then at Trader Joe's, finished with 10 items or less at Kroger.

Here are some observations.

1.  There is never a good time to shop at Wal-Mart, but the hour before the Super Bowl starts is an especially bad time.

2.  No matter how bad I look - unshowered, covered in dustbunnies, hair askew - I never look bad enough to avoid going to Wal-Mart - and even thought I worry a little about ending up on peopleofwalmart.com, I never look worse than a great many of the shoppers or employees.  Score one for me.

3.  There are more screaming babies at Wal-Mart per square foot than anywhere else on the planet, and that includes the Maternity Ward of any hospital.  The way I see it, the kids are reacting the way we want to - if only we weren't mature adults.

4.  I have a friend at Weight Watchers who calls it Squall-Mart.  It's funny because it's true.  Wail-Mart is also funny/true.

5.  I once saw a note in our sales software that indicated a contact at one of our customers was "on maturity leave".

6.  My new keys are of the "switchblade" variety.  Only one problem with that.  They're right-handed. 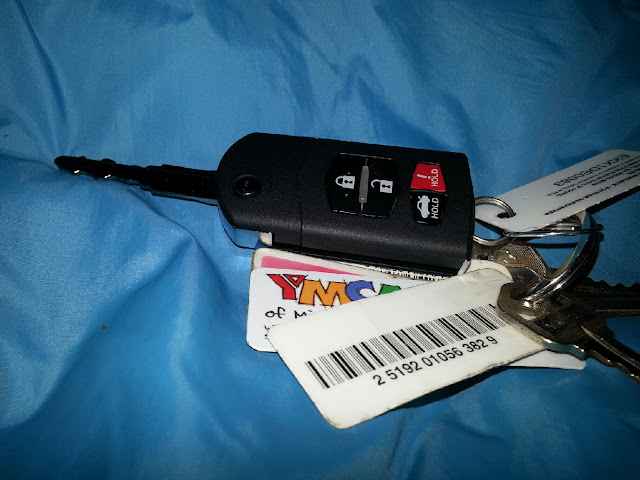 I, for the record, am left-handed.  It's not a deal breaker, but it took me a few days to realize that the Mazda people, like the rest of the world, are conspiring against me.

7.  Half-Time of the Super Bowl is an excellent time to go to Trader Joe's.  You couldn't ask for a better time.  There were no crying babies.  There were a questionable number of young children there.  At 8PM, on a school night.  I'm not judging their parents, except - I totally am.

8.  I had a $100 gift card to TJ's - a gift from Mom and Dad at Christmas.  So I took it tonight.  Wasn't really paying attention, but bought per their (and Matt's) mandate, "fun things".  Got a few bars of nice soap, some flowers - the impulse things I always want to put in the cart, but don't because it's not pasta sauce or chicken burgers or hummus.  I did grab a second bag of oranges after the produce clerk raved about them, and then apologized for trying to upsell me, assuring me that everything in their store is guaranteed.  This.  This is why I love my Trader Joe's.   Anyway, I got to the register, fully prepared to supplement the bill - but it rang up to $99.44 - SCORE!

9.  Finished off the day at Kroger, because, why not hit the trifecta? To be fair, the reason I hit Wally World (the only reason) is that I needed a lampshade.   But (and I hate to admit this), WM has better prices on a handful of things.  That said, they're further away, and I'd rather shop at Kroger, where there are still crying babies, but less ground to cover - and generally, much better checkout experiences.  I may cringe at the "Have a blessed day" I often get at Kroger, but it beats the caveperson grunts I get at Wal-Mart.

10.  Although I'm not a traditionally detail-oriented person, I do put my groceries on the conveyor belt in the order they are to be bagged:  I separate out my cold and my room temperature stuff.  I also make grocery lists in the order of the store layout.  So, I guess I have the capacity to be detail oriented.

11.  I wonder if they make left-handed switchblade keys?  A quick check of the old Google says no.  Ok, I'll adapt.  Slowly.