on December 13, 2012
So, two nights ago, I was walking over from our offices to the hotel next door for a little Christmas cocktail hour with my colleagues.  Our holiday party, as it were.  I introduced myself to a gentleman I'd never met who works out of Texas.  He's Danish.  Wrap your mind around those two accents for a second.  Anyway, I have some passing knowledge of Danish customs, so we chatted for a minute or two.

About twenty minutes later, as I was drinking my rum and diet and wrestling with a tenacious Brie en Croûte at the buffet, when another colleague, from Maine, asked our Danish Texan if we'd met.  "Have you met Allison?  You need to know Allison."

I was just looking at the word croûte, and I feel that I should tell you - the circonflexe over the u is a linguistic indicator that an earlier version of the word had an S after the vowel - so, basically, "crust".  I know, I know - my linguist tangents are just fascinating.

Last night, I went to see a comedian that I've been watching on TV lately.  His name is W. Kamau Bell.   He has a show called Totally Biased on FX, and he is damn funny.  I mean, solidly hilarious.   One of his writers opened for us.  She was equally funny.  Both of them do a lot of social humor - politics, sex, religion... and those things make me laugh.  A lot.

I laughed hard enough that I woke up with a sore throat.

Here's a quick celebrity sighting of me with the headliner himself: 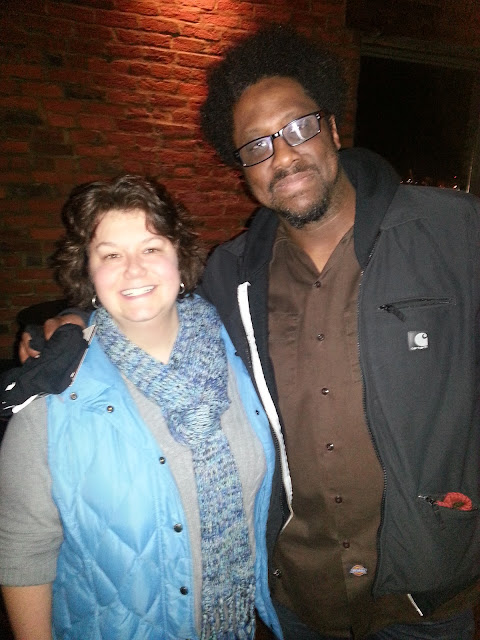 I'm having some hair issues, and growing a "third eye" zit, but other than that, good photo.  He could not have been nicer!

There was a  local guy who opened for him - did an impression of Werner Herzog reading a review of the movie Groundhog Day.  I howled.

Laughter is the best medicine.  Even if you're not sick.