I decided that I would take the time to work my way through my calendar and pick out all the trips I made for work this year.

Here they are, in chronological order:

Skowhegan, ME (a stretch, but since it was work adjacent, I'm counting it)

Twenty-one trips.  That averages to one trip every 2.47 weeks.

So, let's give out some awards, then, shall we?

Best Hotel:  That's a toughie.  I'm going to have to give it to the Hilton in Northbrook.  Quiet, safe, clean and cozy. I stayed in two Doubletrees (Somerset and Winston-Salem) that were nice.  The Executive Pacific in Seattle had the best toiletries.  And Hamptons are generally the nicest hotels across the board.   I have it pretty good.  But the Northbrook Hilton takes the prize this year.

Worst Hotel:   The Marriott in Melville, NY.  The ice machine flooded the carpet on my floor, and there was a vague wet dog smell there.  It wasn't bad, but it wasn't good.  I mean, really "worst" is subjective.  I never stay anywhere skeezy (once, two years ago in Peoria, I stayed at a sketch place called AmericInn). The second trip we stayed in a Hilton.  Much better.

Best Restaurant, Ambience - Old Ebbit's Grill, Washington DC.  Because we got to see the freaking White House across the street.  The crabcakes were a bonus.

Other Best Meal, Grocery Store (Expensed):  The muffaletta at Central Grocery in NOLA.  Of course, the Shrimp Po Boy I had at dinner that night at some hole in the wall place was equally amazeballs.  OMG.  New Orleans.

Best Meal, Restaurant (Not Expensed): Stewman's; Bar Harbor, ME.  A lobster roll, courtesy of the lovely Price family.   Actually, the ice cream at Ben and Bill's later that afternoon was also amazing.  Oh, and Giffords had good ice cream, too. 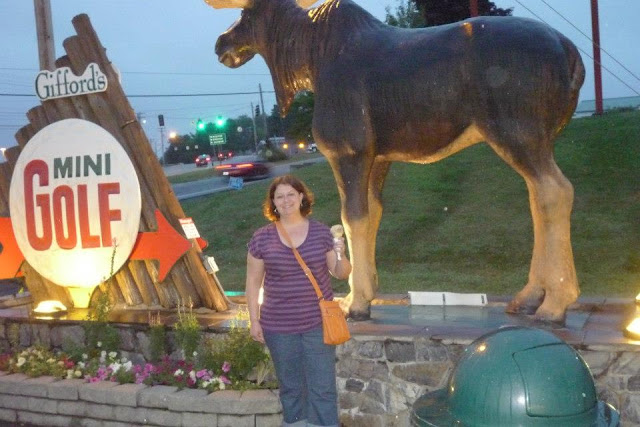 Best Meal, Provided by Customer: Fried chicken and mashed potatoes and green beans and this cherry cheesecake pie  - provided by my friends in Russellville, KY.  When your facility is 20 miles from anywhere, you have to plan ahead.  This was a great meal.  And the people were all so NICE.

Best Meal, Other:  Lunch on the Green Egg; Skowhegan, ME.   Andrew made burgers with homemade smoked cheese.  Michelle brought a pie, Wanda brought ambrosia, I made potato salad, Derek played sous chef, and we had a fine lunch.  As a bonus, we all smelled like wood smoke for the rest of the day.  Delicious, and some of the nicest people ever.


Best Airline:  TIE -   Southwest and Frontier.  Day in and day out, Southwest provides the best service and the easiest experience.  But Frontier offered to courtesy check my bag at no charge because they noticed both my flights were going to be full, and they thought it would make it easier on me.  It did.  Thanks, Frontier.

Worst Airline:US Scareways.  Not friendly, not helpful, never once did I take off on time... I'll avoid them like the plague.

Favorite Airport:  Hartsfield Jackson - Atlanta, GA.  It's the airport of my youth - it has the best shopping, the best food and I love the train that takes you to each Concourse.  Cafe Intermezzo at Concourse B beats a Chili's Too any day of the week.    For a teeny tiny airport, I'd give mad props to Columbia, SC.

Least Favorite Airport:  Charlotte.  Because of US Airways, and because I never found any food there that wasn't a little gross.  LaGuardia and O'Hare may not be my favorites, but they're still better than CLT, which I have been reminded is just an i away from clit.

Best Training Space: Fire Hall Classroom - Garner, NC.  Functional wireless, natural light, a good screen and projector, but most importantly, Lucy, the firehouse dog was allowed to wander in and chill with us.

Best After Work Fun Activity (Non-Skowhegan): Driving into New York City with Jonathan, Clover and Mike.  I cannot believe I drove.  In New York City.  In Times Square.  And didn't kill anyone.  Also, I got to look at some sweet, sweet eye candy.

Best Crazy Decision:  Getting my nose pierced.  Love.  It.


Favorite Rental Car:  Mazda 2 in Chicago, or the Mazda 3 in Columbia and Skowhegan.  Either way, sweet ride.  I'd definitely look at that for my next car. The Ford Edge didn't totally suck, either.  Especially in NYC.

Least Favorite Rental Car:  Crown Victoria.  Driving this heavy POS in Chicago traffic make me grind my teeth.   I also had a Chevy Aveo, and they suuuuuuck.

Favorite New "Duh!" City:  New Orleans - Duh!   So nice, I went there twice.  The second trip was in May, and it was a 40th birthday boondoggle for my friend Jim.  Love it there.


Favorite New "Really?" City:  Cincinnati.  Really?  Yep.  Well, more specifically, Covington, KY, just over the river.  But baby, if you ever wonder, wonder whatever became of me - I'm eating dinner at the Hofbrau Haus near Cincinnati.  Amazing, and a cute neighborhood.  Similar vibe in Columbus, OH.  I do love a good sausage (giggle).


Favorite Did You Know? Moment:  Did you know my parent company has all these wolf statues on campus that are there to keep the Canada Geese off the grounds.  Maintenance is charged with moving them around daily to keep the geese confused.  It doesn't work very well.

So a lot of great travel, great experiences.  If you'll notice the photos I'm in, they all have one thing in common.  Me, smiling.

I intend to keep up the travels, but it's time to slim down a little.

Does that mean I give up Portillos?  Hell no.

It does mean that I give up Raisinettes at the airport.

And that concludes my 2012 Travelogue - Best Of Edition.