on October 25, 2012
So, I don't drink a lot.  I mean, I drink more now than I ever used to - but by that, I have maybe on average, two drinks a month.  Of course, that could mean four drinks one night, and then nothing again for several months.

But still, I'm pretty moderate when it comes to fire water.  Some of my ancestors had problems with the hooch, so I try to be careful.

I clearly have issues with food.  It's been duly noted.  And if you need proof, I have my weekly passbook for Weight Watchers.  If Donald Trump would like to offer me $5 million to release my records, I will be happy to publish.

I'm clearly a social media addict.  The interwebs love me, and I love them right back.

But my newest addiction is my smartphone. It's just so shiny and fun and new.

Specifically, there's a game that has me captivated.  It's called Draw Something.

Now, this game is nothing new.  Those of you with smartphones have been playing it for ages.

The premise of the game is that it's online Pictionary and you're playing with a stranger.  Or, if you can con a friend into playing... there's that.

I talked my friend, Jim, into downloading it.  We've been locked in battle for about a week.

Here's a little something I concocted for him: 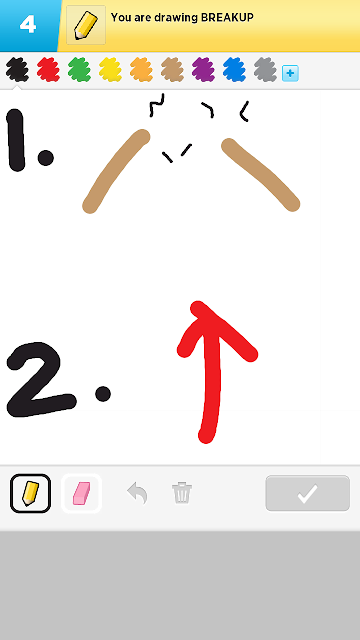 So, it's not booze, or boys or pills.  It's not food or shopping or trash TV.