on September 09, 2012
So, I decided that today would be as good a day as any to make bread.  I found instructions on a website, and set forth into the great unknown.

Here's my loaf of four ingredient French bread, just before hitting the oven, where it is now. 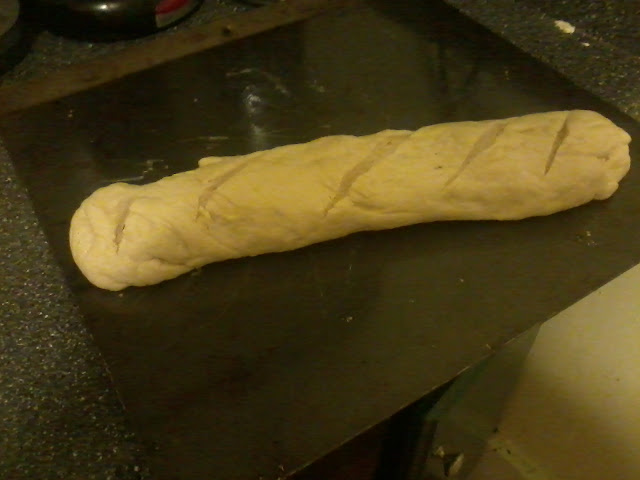 I think it'll be fine.  Will it be the greatest loaf of bread known to man?   Doubtful, but can I cross it off my culinary bucket list?  Sure.

Working with yeast isn't hard, or scary.  It's just yeast.

Now, here are a few other things I'd like to try... eventually.

I may be struggling a little with the diet.  Just saying.

I was pretty productive this weekend.  I hit up Zumba, I did laundry.  I cooked, I cleaned, I came, I saw, I conquered.

And that's really enough.  It's a quiet week at work, in that I don't have a lot on the calendar, but we're a week out from the User Conference.  I need to focus on prepping for that.

But for now, I'll wait and see what my bread has in store.

ETA:  As it turns out, I can fucking make bread:

Just had a nice taste.  YUM.  It's as good as the take and bake from Kroger, so BOOM!

Paige said…
I do pie crust and pasta. I've even got a pasta roller that I bust out the once a year or so I make pasta. If you do decide to try pasta, I recommend ravioli. It's the only thing that really worth all the extra effort.
September 19, 2012 at 9:10 AM