Girl, you so crazy!


So, earlier this week, I had a bad day.  They don’t happen often, but this one just kind of hit me like a ton of bricks.

I snapped at a few people – for reasons both justified and irrational, and I threw a hissy fit late in the day when I got on the scale at Weight Watchers, and found the number not to my liking.

On my drive home, I decomped in the car and finished off the night scowling in front of the TV.

Part of the problem is that I hadn’t slept well or enough the night before.  Lola woke up wheezing and coughing, and we never really got back to sleep.  Matt even went into work at 5AM to get a jump on his workload.

So I went into the day in a fog, and when people started getting loud in my workspace, I suggested to the two managers making the noise that they had perfectly good office and they were being “loud as hell”.  Charming.

Later in the day, I made some suggestions to another manager (a kid I hired four years ago), that perhaps we should hold our developers responsible for things that were broken.  I dropped multiple F bombs in his office.  A blue streak.

And, as  I said, I nearly flipped  a table Weight Watchers.

And I looked at the calendar and I thought… 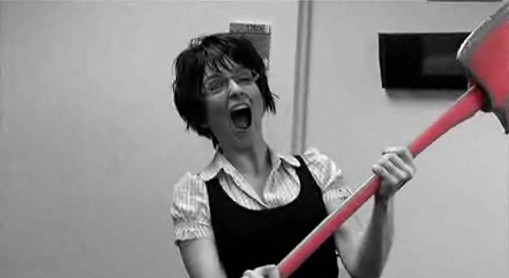 (If you have never seen this SNL fake ad, get thee to Hulu immediately)

I totally hate that my emotions are guided by little more than moon cycle.  Seriously.

Whatever.  The good news is – I rarely fall apart like that.  And thank heaven, because I felt sooo crazy.

After a good cry and a good night’s sleep, I felt way better.  And now it’s Friday.  And that feels amazing.

We don’t have much planned this weekend, and that’s OK with me.  I need to hit the Y again, and again and again.  I do like the classes – I need to find more of them.

I’m not telling you anything I haven’t told you before.  That’s the simple truth.

There are a lot of simple truths.