My packing for New Orleans is coming along well.  I have clothes in the wash, I have lots of options...it's exciting.

I have to get through tomorrow at the office, then Sunday, I leave for Chicago, or, I guess the suburbs of Chicago.  I'm stoked and nervous.

And once I get through that, it's time for some fun.

But enough of that.

A few things of interest.

One, an observation.  Two people that I went to high school with, and who married, divorced recently.  I wasn't close to either of them, but I'm friends with both of 'em on Facebook.  And here's the observation...
The guy has a new girlfriend.  He either didn't waste any time, or he had her waiting in the wings.  And that's not even the observation.  The observation is that she looks insanely like her predecessor.  And I've seen that happen before, but it never ceases to surprise me.

Two - I'm leaving with my garden in good shape.  I'm grateful for amazing germination.  Every year I plant morning glories, and every year I'm amazed that they grow.  Like so: 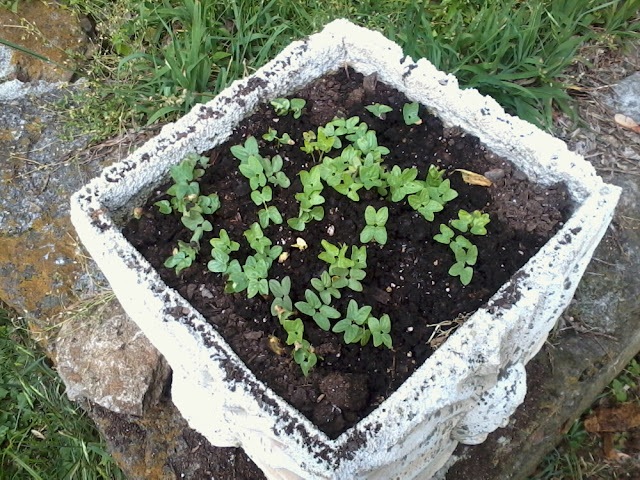 Three:  After three days of panic, I bit the bullet and bought some grownup people shoes.  I had a pair of heels in black, but I needed some in brown.  Which, I found.  I had to pay grownup money for them (I mean, they were under $50 (barely), but for someone who likes to spend about $20 on shoes, it stung a little.    They are however, pretty cute.


Four... I managed to take care of Mother's Day early this year.  Go, me!  Mom received it today, and it was a hit.  I got her a nice Eileen West nightgown - they're the ne plus ultra of fancy gowns and Mom loves them.  I told her to go ahead and open it and enjoy it.

Five; The same day I mailed Mom's present, I mailed my nephew Henry's present.  I got him clothes, and of course, a water gun.

And I guess that's most of it.  Matt and I are hitting up a Preds Game tomorrow night.  Currently, the Coyotes lead the best-of-seven series 2-1.  But I have a good feeling about our game.

Saturday, I get to go to an arts/crafts fair, then a party...

More, I cannot tell you.