on April 24, 2012
So, in re: NOLA.  I was telling the birthday boy that our trip was going to be a redo of Where the Boys Are, but without the unfortunate date rape scene at the Rainbow Motel. 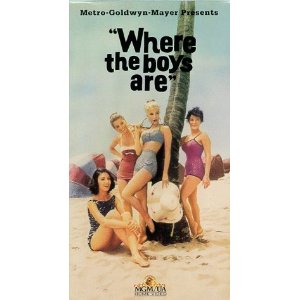 I started speculating who in our group was Melanie, who was Tuggle and so on.

I should take a step back.

In my sophomore year of high school, my Chemistry teacher, Mr. Burnett, showed us this movie in the two days leading up to Spring Break.  Well, he started showing it the first day.  The second day, nobody wanted to watch it, so I had to go get a copy at Blockbuster to see how it ended.  From that point forward, I have watched it nearly annually as a Spring ritual.

Here's the short version - four girls, each representing a different "type" drive from a large midwestern college to Fort Lauderdale, Florida to get some fun and sun.  And because it's where the boys are.  And that's why it's called... well, you get it.

Hilarity, hijinks and horizontal hokey pokey ensue.  Merritt falls in love with George Hamilton.  Tuggle falls in love with a goofball who is ten times the man that George will ever be.  Melanie falls in love and in bed with two boys and gets date raped for her efforts.  Angie spends the movie trying to meet a guy and ends up settling with a jerk who tolerates her, barely.

What I learned from this movie back in 1991 is that whether you have sex or not, you're fucked.

I also realized that we are all part of each girl in the movie:


Merritt - The protagonist of the movie. She starts the movie nearly getting kicked out of school because although she has a very high IQ, she struggles with classes and expresses her belief that people ought to play house before marriage.  She has the best clothes, she's totally gorgeous, and not surprisingly, Ryder Smith (George Hamilton, splendidly tan) falls for her, takes her onboard his yacht, and doesn't manage to collect her V Card. Instead he wins her heart.  I was/am so enamored of Merritt, I'd name a kid after her.  Or my next dog.  Whatever.

Tuggle -  All Tuggle wants is to meet a guy with feet as big as hers.  She's a lot of girl, a lot of nice girl.  Tall, goofy and pragmatic - Tuggle is the adult of the group.  She wants to meet a nice man, leave school and make babies.  She's a good girl, and has no intention of giving it up before she has a ring on it.  Tuggle may be too tall, she may not be the prettiest girl in the world, but she has self-esteem.  By the end of the movie, she also has TV Thompson, played by the delightful Jim Hutton.  Anyone with a brain realizes Tuggle gets a better deal than Merritt.

Angie - Captain of the girls hockey team, songbird, and improbable "designated ugly fat friend" (given that she's neither ugly nor fat).  Her self-esteem is lower than a limbo pole.  And yet, she's relentlessly resourceful and cheerful.  But even though the odds are in her favor and she has big boobs, she cannot get the attention of a single male.  Until she throws herself at Basil, a legally blind dialectic jazz musician, who allows her to rosin his bow.  And that's not a euphemism.  We never find out what Angie thinks about pre-marital sex because Basil basically tolerates her with amused disdain, and she doesn't have the presence of mind to tell him to fuck off.  She does, however, get to belt out the title song, and she gets a fun little musical number mid-movie.

Melanie - Played by the lovely Yvette Mimieux.  Poor Melanie makes the mistake of listening to Merritt's sex advice and acting on it.  She first sleeps with Dill, then when he has to leave town, she picks up with Franklin.  She's supposed to meet up with Franklin her last night in Florida, but he sends Dill, who rapes her.  She ends up walking down the highway half dressed and disheveled and ends up getting clipped by a car and finishes a movie in the hospital.  All because she listened to Merritt.  Fucking Merritt with her intact hymen and Ivy Leaguer boyfriend.

The fact is, on any day of the week I'm every single one of these girls.  I'd like to think that I'm a Merritt/Tuggle hybrid.  Realistically, I'm more Angie than Merritt, and occasionally, I have moments of Melanie.

This movie is based very, very loosely on a book by Glendon Swarthout.  How loosely?

Well, in the movie, TV Thompson gets his nickname because he's a Journalism major.

In the book, it's because he goes a little too far with a sorority girl, and in fear of getting blackballed by all her sisters, and every other girl on campus, he presents that sorority with a TV, to bribe them.

Yeah, I may be a little obsessed.

Also, in our NOLA scenario, we need 2 extra characters.  That makes me either Lola Fandango, or the drunk guy at the beach.