on March 02, 2012
I had a conversation with Archibald today - during which he referred to me as "matronly" - because I had set up a desk for our new employee who is starting Monday.  I know he really meant more "motherly" - and I told him so - and he retracted his statement.


But because I cannot help but beat a dead horse... 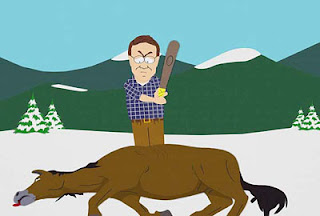 I sent him the following email (name changed to protect him, God knows why):


From: ae
To:Archibald Stab
Subject:  My friend, the dictionary

: having the character of or suitable to a matron
ma·tron
noun \ˈmā-trən\
Definition of MATRON
1a : a married woman usually marked by dignified maturity or social distinction
b : a woman who supervises women or children (as in a school or police station)
c : the chief officer in a women's organization

I think we can agree l lack the dignity, maturity and social distinction to be matronly.  While I have a great many womanly, nurturing qualities, you’ll note that the example uses of the word are largely pejorative.

But you sure do know how to sweet talk a girl.

Yep, I may have some lingering issues from Baltimore.