on February 26, 2012
Another weekend almost over.  Sigh.  Good news, though - I slept plenty, had lots of fun and got to go to a great party.

At the party, one of the guests brought his four year old kid, and she was not especially well-behaved, nor was Dad paying much attention.  She ended up with her grubby hands all over the cheese that we'd laid out for the burgers.  Yeah, I don't love kids.  We've established that, yes?

Now, on the other hand, my hostess' newest edition, an eight week old French Bulldog puppy named Beau, was sweet as pie.

Here he and I are, sharing a moment... 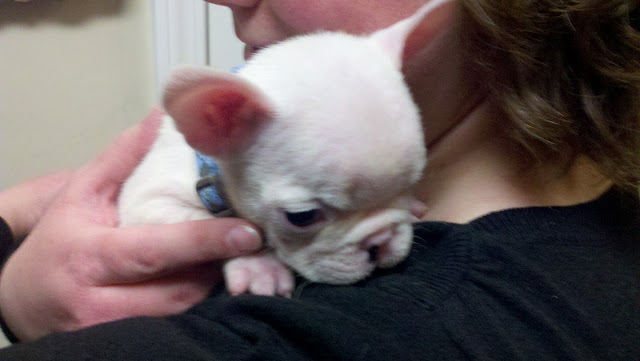 He looks like The Brain from Pinky and The Brain.  Love him.

And tomorrow, it's once more into the fray.  I think it'll be a good week.  My boss won't be there, which is a bummer, but we'll be making room for a new colleague - one that has my dubious seal of approval.  He seems like a good guy - he fosters dogs from the Music City Pug Rescue.  He has one now named Mimi.  He bought her a hat off Etsy.com.  I think we have a winner.

Life is pretty good.  I have a few little things nagging at me - but the good news is that life is 20% what happens to you and 80% the way you deal with it.

And that, my friends, is all that I can say for now.