And all that jazz...

on April 07, 2011
So, last week, one of my female co-workers came running over to my desk, screeching, to show me an advert in the Nashville Scene (our local weekly alt-entertainment rag) for Vajazzling.  She wondered what exactly that was, so we Googled it.  As the name may imply, it's a portmanteau of va-jay-jay (slang for vagina) and Bedazzling, the act of applying rhinestones.

In short, it's decorating your bare, waxed nethers with crystals and glitter.

While it's an amusing idea in practice...count me out.

Of course, it's a hot topic at the office now.

I think it would be funny to apply, rather than crystals, some of those googly eyes you find at craft stores: 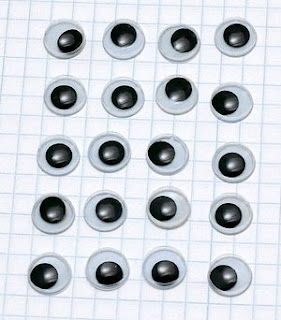 I mean, really - only the truly humorless can't see the possibilities there.

Meanwhile, I'm shaking off last night's disappointing weigh in, and re-dedicating myself to the cause.  But I have to say, I still want salt.  I wonder what my body is trying to tell me.

I did eat better today - no errant cake consumption, or trips to the vending machine.  I ate some crackers from Trader Joe's, but my Points (Plus) are on track.  Now, just need to do that six more times, get a little exercise in, and drink a ton of water.

I also want to spend some time working outside this weekend.  I need to get my deck plants in order, which means repainting and fixing my chair that I plant in, sweeping up old broken pots, and generally making some decisions.

And of course, the house is a mess.  I say that daily, but it's tough to make a dent.

Which, really, is a statement we could extend to life in general.

Good news though.  There are baseball games in my future, and a bowling outing, and a much needed trip to the dermatologist.

I need a haircut, and Lola needs to have her annual exam - where I know they're going to want to do lots of fun things to her.

Maybe they can vajazzle the patch where her hair still hasn't grown back after they removed that lump on her back last August.

What would they call that then?  Body art?  Dressed to the K-Nines?

Let's keep it that way.