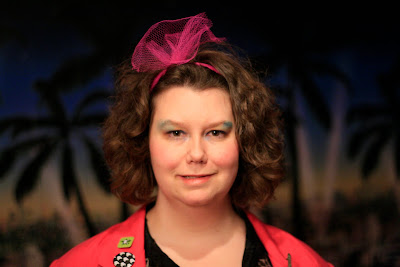 This is a picture of me all dolled up from our cousin Hannah's Sweet Sixteen Party down in Dalton, GA.  Don't let the background fool you - I'm not in a beach somewhere in Miami circa 1987.

And don't let the awesome make-up job mislead you, either.  I have no idea how to successfully wear four shades of eyeshadow at the same time.  What I find most distressing from the photos is that even though I've lost almost 20 pounds and people are telling me how noticeable it is... I'm still actually quite fat.  Which means, among other things my self-image has been very distorted for a very long time.  If I were a braver woman, I'd pick one of the less flattering pictures Matt took of me to share - and there are plenty - I'm always his test case for lighting, etc.  So there are plenty of excellent shots of the back of my frizzy flat head, my large posterior, swathed in acid wash and HOT PINK jacket.  Lots of jowly double-chinny action, and what the hell?  How does someone's forehead get so fat?  The fact that my smile is crooked in this picture is nothing - at least I look a little less lardy.

So, self-deprecation aside, the weekend could have gone far, far, far worse. I ate three pieces of pizza at the party (two with ham one cheese), a small piece of cake, a cookie and a handful of cheese doodles. 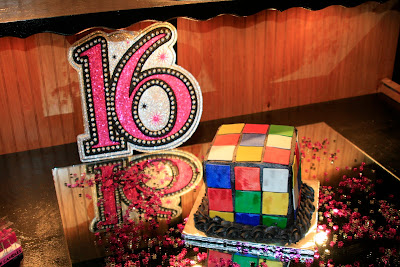 I had a chicken biscuit from Bojangles at breakfast this morning.  And got instant heartburn.

I didn't touch the pound cake, hash browns, blueberry (OK, OK, Bo-Berry) biscuits. I didn't stray into the jar of candy in the kitchen. I did eat a cheeseburger at Steak and Shake, but I didn't get fries, and I definitely didn't get a shake, dammit.

My fingers are swollen like hot dogs, and I'm not getting on the scale until the morning, because I don't want to know - almost as badly as I do want to know.

That said, the party was a success, the weekend was a success. None of the family noticed I'd lost any weight, and that's actually fine with me - though if they had, I might have been more inclined to say when on the pizza. 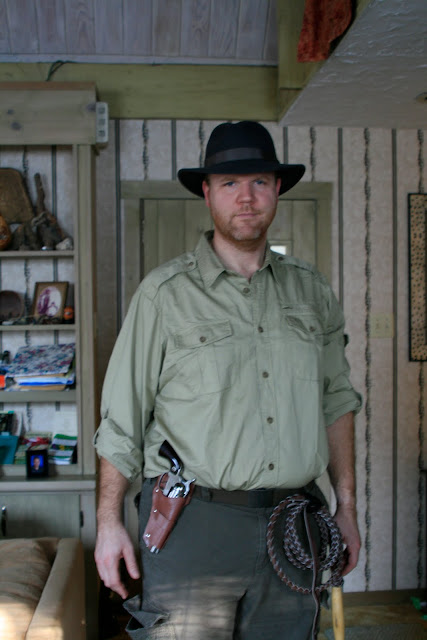 But, as you can see, Matt and I both had great costumes,  we had fun seeing folks we don't get to see that often, and I swear, there is something special about the Pad at Kelly and Flora's that causes me to sleep like I've been drugged.  Except that I wake up completely rested.
Tonight, I ate a sensible dinner, we went to see "Night of the Hunter" at the Belcourt, and now I'm winding down for a week at the office.
I don't have just a ton of training, and honestly, what I could really use is a big old bunch of money and time to spend it.  I need new tires, some new clothes, an oil change, and about three days off to get some Spring cleaning done.
And, I need to detox.  As we know, I vowed not to mess with the dieter tea, but... eggshells and promises sometimes get broken.
Mmmmm.  Eggs.
And because you've read this far... 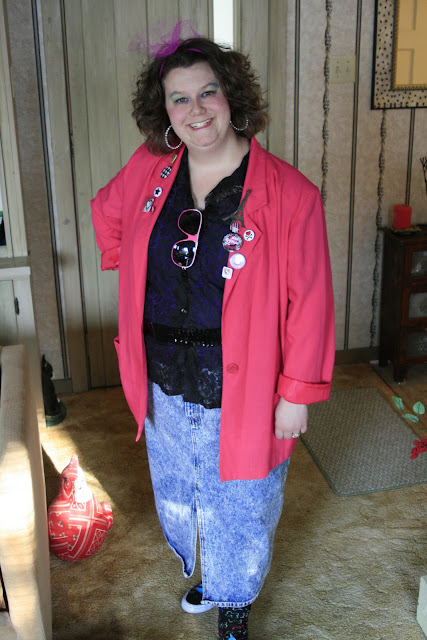 Ok, ok - I may have to put this one on my fridge.   But you have to admit, I can throw together sweet, sweet Goodwill Couture.
With my own puffy paws.