But I'll tell it again.

Twelve years ago today, I was still living with Mom and Dad. It was a Saturday and my parents were headed to the Mountains for the day. I was headed to the Mall. 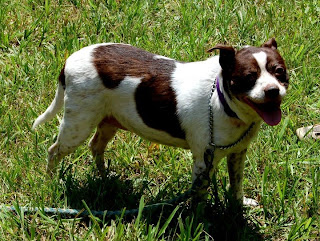 I told them before they left that if our friend Katie had puppies at her farm, I wanted one.

Since it was mid-Winter, they explained that it was unlikely, but agreed.

While I was buying my father sugar-free Valentine's Candy at Happy Herman's, and chocolate covered cherries for Mom at Godiva. I stopped at PetSmart and looked at the mutts they had from the local rescue groups...eh. I went home and took a nap.

When Mom and Dad arrived home, they called me downstairs to look at something.

And that something was Lola.

They heard her before they saw her. They were in my father's Jeep Wrangler, and driving down the dirt road, they heard yelping.

They stopped and saw a small beige and brown dog wailing on the side of the road, in the middle of nowhere. They got out, scooped her up and wrapped her in a jacket. Once they made it up to the mountain house. They put her in a box near the oven, opened the door and got her warm. Mom gave her some roast beef out of her sandwich. Lola ate it and went back to sleep.

She was still logy when Mom and Dad handed her to me - so they suggested we head over to the Emergency Vet.

At the vet, they checked her out, and said she looked fine. They opened a can of food, gave her some water, and she inhaled it. She then peed on the exam table, and we knew she was going to be OK.

We bathed her that night, and learned she was actually not beige but white. She was pretty filthy.

Lola became the newest member of the family, and she was quite the wild child. She loved to bite, chew, and play. She didn't like to eat at first, but within time, she did that like a champ, too.

From my point of view, Lola healed me. I had been left broken and hurting from a relationship that ended badly. At the same time, my first job came to an end after my company was acquired. I was raw, angry, depressed and needed a purpose. Lola became that purpose.

Within a few months of finding Lola, my new job took off, I was making great money and I decided to get an apartment.

A year after I moved into the department, I started dating Matt. Lola, who had been unfriendly to two guys I'd gone out with, fell in love with Matt at first sight. She hopped into his lap and leaned against him.

With that taken care of, I let Matt meet my parents shortly thereafter.

Lola has been with me through many different jobs, several apartments and a house, lots of birthdays, Christmases, Thanksgivings and Easters. She's seen me fat and thin, sick and well, overworked, underpaid, underworked, overpaid. Lazy and ambitious, single, dating, engaged and married.

Lola has been there for all of it.