I really want to go work for them. Badly.

2. We bought a PS3, and we're looooving it. I am really enamored of Little Big Planet. Especially the sackboy, which is this little guy: 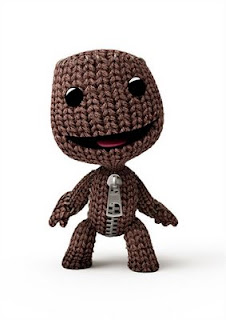 What can I say?  He's precious.

3.  We went on our annual canoe trip over the weekend, and this lovely Blue Heeler mix latched onto us for the day.  I had visions of taking him home and giving Lola a friend.  He eventually left, but I would have enjoyed having a young fellow at the house.  It wasn't meant to be, but he was pretty cute.  Lola liked him too.  She has a fun time on those trips.  So do we.

That's about it for now.  Another month with just a few posts.  But we've been busy.  Alaska, Work, Baseball, Canoeing, Anniversary (our 5th), and such...  Hoping that September proves more restful.