Hot Fun in the Summertime

on June 10, 2010
Hard to believe that we’re barreling through June like a freight train through a small town.

And yet, I’m starting to plan out my 4th of July. My body is at work, but sometimes, my mind wanders off to the mountains.

Speaking of – I’ve talked to Dad, who is up in the mountains, and he’s not only seen a bear, one apparently broke into our cabin.

Last time we were up there, talk was that a truckload of Mexican workers had been spotted near the gate. Now personally, I take the wording of a former colleague of mine named Tony and say, “Why they gotta be Mexican?” Why not just “workers”?

My enlightened family has since been joking about wily Mexicans, so when I called Dad to get clarity on the break-in, my first words when he answered were, “Are you sure it wasn’t Mexicans that broke into the cabin?”

Dad explained that the window screen had been shredded, and that the bear/hombre who broke in chewed up and clawed through a stack of paper plates. Ok, ok. I’m going to have to go with bear on this one.

And yet, I still can’t wait to get up there.

I finally seem to have my garden in place.

I read that they will have the State Fair at the fairgrounds again this year, so the pepper crop is crucial. And I didn’t get it planted until late, and to be honest – they don’t look great. They don’t look terrible, but - well, I have til the first week of September to throw jelly together. Now , I could buy peppers at the Farmers’ Market and still make jelly, but doesn’t that defeat the purpose? We’ll have to see.

By the way - at a recent work function, the CTO's wife came up to me to ask if she could be on the jelly distro list again. Flattery will get you everywhere. It doesn't hurt that I think the CTO is probably the biggest badass on our management team, and I respect him completely.

Now here’s the funny part. I was taking Lola out the other day, and among the weeds on the right side of the stairs, where we opted not to plant this year, I saw a weed that looked very familiar. So I bruised one of the leaves and smelled it. Unmistakable. Tomato plant. And in clearing the weeds, it turns out not just one plant, but a whole cluster of them.

I put cages around them and cleared the ground. I expect nothing, but think it’s very cool that somehow, some of last year’s tomatoes decomposed, lay dormant through the winter, and with no help from me, weathered the May monsoon and germinated. I’m stunned, really. And even if nothing comes of the plants, they’re a reminder that miracles do happen – you just have to keep your eyes and mind open. 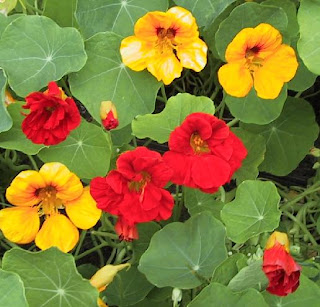 This year, rather than Morning Glories, I planted my pots and such with Nasturtiums – I finally got them in on Saturday. The bad news is, something seems to be interested in the seeds. Squirrels, if I had to guess.

The seeds are on the large size, maybe the size of a cherry pit, and you have to rough them up a little before you plant them so that they’ll germinate. Well, all my pots have been molested, and I’ve seen a few seeds that have surfaced above the soil. The seeds themselves look a little like tiny shriveled brains. It's unnerving.

Nothing sprouting yet, which is fine – the germination period is 10-14 days. I’m not holding my breath. Something tells me I should have stuck with a known quantity in my Morning Glories, but every year I worry, and every year I am pleasantly surprised.

And in other Pleasant Surprises news, my mother offered to buy me a dress we both admired in a catalog, and who am I to say no? It hasn’t arrived yet, but I’m looking forward to it.

I hope it looks good on me – because in the catalog photo, this model is easily a foot taller and several shades tanner than I. Also, she has awesome hair. Look, let’s face it – I should have been born a black woman. It just is what it is.

Black or not, I’ll be wearing the dress to my girlfriend Connie’s baby shower. She’s having a boy, and I need to get shopping. How young is too young for a pocket knife?

I kid. I kid because I love.