on January 12, 2010
There have been lots of race stories in the news as of late. Senator Reid publicly referred to Obama using the word "negro". Rod Blagojevich, a man whose 15 minutes should have ended a year ago claimed that he was "blacker than Obama". I'm willing to give Reid a pass - and not just because he's a Democrat, but because in the context of the quote, he wasn't being hateful, just misinformed and old-fashioned. I think Blago needs to just drop off the face of the Earth, the sooner the better. The Obama quote is just further proof.

In light of these sensitive times, I thought I'd share with you my latest story in race relations. In the mail today, I received a lovely catalog from a company called Ashro. I suspected when I saw it that I had been put on their mailing list because of my zip code (and possibly because I am a stylish woman of size). Why do I say that? Mainly because this was image on the cover of the catalog:

The captions indicated that Ashro offers Afrocentric Style for Sisters. So, yeah. I'd say that maybe Ashro made some assumptions about who I am. True, I live in a predominantly black neighborhood - but I should note, I myself am not black.

That said, they had a lot of really gorgeous clothes, and while some of them were definitely not my thing, mostly because I have no real need for colorful Sunday Church suits and matching hats, there were more than a few things I'd order. The colors and prints were bright and fun, the cuts and styles were flattering, and they have things in all sizes.

Also, they had some wigs with hairstyles that looked...well, a lot like mine. I'd say I'm a cross between: 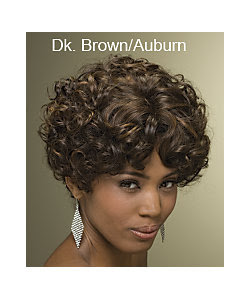 Fiery Karen (yes, that's the actual name of this style) 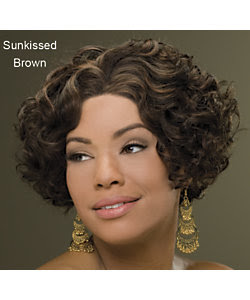 So, I don't know, maybe they know me better than we thought. The note on the front of the catalog said if I don't order soon, they'll stop sending me catalogs. I'm just trying to find a reason to need a gorgeous buttery yellow pantsuit with ruffles at the neck and leg. 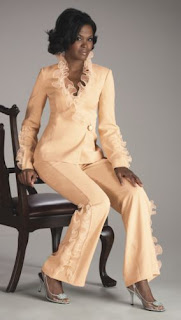 Alex said…
I'm glad you finally clarified that you're not black... for YEEARS I was like "GRRRR I wish I knew if Allison is black! I mean, she sometimes walks like a (married) black woman and all.." So THANK YOU for putting this into my past. Now, if only I could somehow get Matt to answer the same question, I'd be in heaven (disco heaven to be more precise - I'm still a European)