Day 1: Despite the fact that Matt and I are convinced we'll be up super early, we, along with Lola, sleep til 8:15. I shower and load up the car, Matt taxis Lola over to the vet to board, and by 10AM, we are more or less on our way.
Around noon, we hit Tishomingo, Mississippi, where we attempt to locate a place to pee (not easy in this bustling metropolis), and Matt preps for his bike ride. I drop him off and head down the trace ahead of him. In an effort to do something wholesome and noteworthy, I walk the trail at Donivan Slough, and take a few photos to prove it. 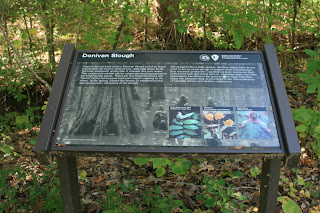 
I then head toward Tupelo, where I need to get a bottle of wine for dinner (part of the recipe, not medicinal). I end up at a shitty little liquor store where I buy an overpriced bottle of red. I then hit the Kroger for a bottle opener and some gas (hey, I can only plan so much), and finally, head to the Chick Fil A for a restorative lemonade. As I am leaving Chick Fil A, I notice a live chicken scratching around in the greenery bordering the restaurant. It was a scruffy little thing, and I got a few pictures, but mostly the bird was shy and didn't want anything to do with me. 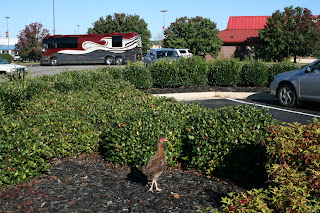 "Lay off me, man, I'm just here for the Waffle Fries!"

Back on the trail, I get a call from Matt that he's met up with some other bikers and will be on the bike for another hour. We set a stop on the trail as a meeting point and I head there. The stop had a gift shop, some photos from the trail that rangers had taken and so on. I killed a little time there, then went back out to the car and paged through my new Southern Living for a bit. Shortly thereafter, two bikers in jerseys, hauling a one wheeled trailer pull up and ask me if I'm waiting for Matt. He was about five minutes behind them. We talked, their names are Tommy and Dickie (Smothers?) and they're from Louisiana.

Sure enough, Matt and another biker pull up. The other biker is Emmie - she is from Switzerland, she's eighteen and adorable. She bought her bike at Halcyon near our house and has hit the trail as part of her post High School effort to see the USA. I offered her our phone number so that if she gets back to Nashville, she can come for dinner. Matt's biker gang are all going to get hotel rooms in Tupelo, but Matt and I have reservations at a campsite 45 minutes away, so we say goodbye, load the bike onto the car and head to Stinkin' Jim's Horse Camp in Houston, MS.

We arrive, and the guy who greets us looks at us as though we've lost our minds, planning to camp in such cold weather. He talks us into setting up the tent in their pavillion - a barnlike building that has electricity (lights, not heat) and running water. Sounds good to us. After setting up the tent with Matt, I start dinner - tortellini soup. We eat dinner, take some photos and Matt showers. We play a few rounds of MadLibs and crawl into the tent. 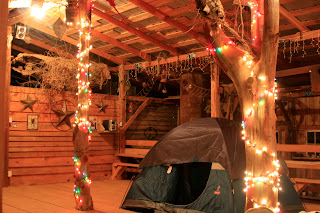 Seriously, if all camping were like this, I think I'd be a happier camper.

A few hours pass and I wake to hear the sounds of our soup bowls being licked and banged together. I unzip the tent enough to see a gray furry streak retreating. Five minutes later, it was back. We bagged the dishes, threw them in the car and went back to sleep without incident.

It got down to 35 that night, and while it was cold, the worst part of the cold is getting up in the morning. Which I totally did. But that would be Day 2, and that's another post altogether.
To be continued!
bike camping chicken Matt vacation