on October 28, 2009
This part is where I get tired, less prosaic and even less likely to upload pics. Oh well!

Matt and I woke up and it was cold. I eventually pried myself from my sleeping bag and went to the shower. Wish I had taken a photo – the doors were marked Mares and Geldings, which, knowing that a Gelding is a Stallion which was castrated, makes me wonder about the mindset of the woman who runs the place.

After a hot shower, I was ready to face the world, and I started making breakfast on the camp stove. It was tasty, and we ate plenty. We gathered our gear and headed out toward the trail once again.

After I dropped Matt off for his ride, I went off the trail in Kosciusko, Mississippi. I initially stopped to use the ladies room at the Chamber of Commerce/Visitors Center, but once I found out it’s the birthplace of Oprah Winfrey, I decided to stick around and kill a little time.

I found a WalMart, which, as we all know, was built for the express purpose of killing time. There I purchased 3 yards of material, a bandanna, and a bag of Pepperidge Farm Brussels cookies, which I’d been craving for a few days. They were stale/rancid tasting. Damn you Kosciusko! 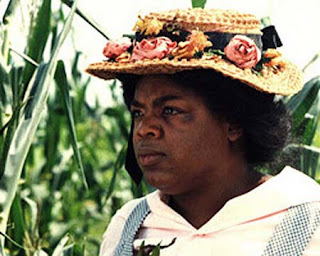 I picked up sandwiches at the local Subway for myself and for Easy Rider, then headed down the trail to chill, eat lunch and fill in a crossword puzzle. The puzzle was too hard for me, so I plugged away at it for awhile and eventually gave up. I met Matt on the trail and drove us towards Natchez while he worked on his sandwich. We saw a gray fox, tons of deer and turkeys and crows. Lots of crows. And anthills. If you are a crow or an ant, get thee to the Natchez Trace, stat!

We got to Natchez as the sun was setting. Matt took some pictures of the Mississippi River, we checked into our room and took more photos.

The room Matt found us was at the Mark Twain Guest House – three rooms for rent over the Under The Hill Saloon in Natchez. If you’re ever in Natchez, check it out – it’s a little loud, a little smoky smelling, but charming beyond compare. Our room was the one facing the river. Very, very cute. 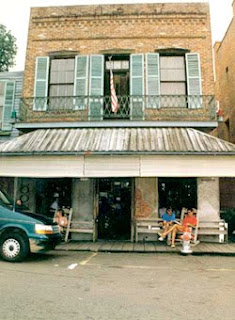 After Matt showered, we headed into downtown and had dinner at Biscuits & Blues – they’re a bar/resto whose mission statement is “Dedicated To the Preservation of Hot Biscuits and Cool Blues” – the biscuits, served with peach preserves mixed in butter, were excellent. So were the blues. So was dinner – Matt had Eggplant Orleans, I had fried shrimp. We headed out, blew a few bucks at the Isle of Capri Casino (a river boat) and went to bed.

After a pretty decent nights’ sleep, Matt and I woke up and hit the ground running – Matt felt like he might be getting a cold. We had a quick breakfast at the Guest House, then packed up, turned in our keys, and drove over the bridge to Louisiana. Twenty-two states down, twenty-eight to go. In Louisiana, we saw prisoners working road detail. I was amused to see them in the archetypal black and white stripes. I couldn’t work fast enough to photograph them, but they looked like this:

We drove back into Natchez and explored downtown. It was there we found my bottle cap dog (see previous post) and I also found some candleholders for Thanksgiving. I thought Natchez was a great little town.

We left and made our way to Tupelo. We had no sooner left Natchez and gotten back on the trail when we ran into a humongo rattlesnake. He was chilling in the middle of the southbound lane and we took a few good pictures. We stopped at a few sites, including a cypress swamp, but we did skip the beaver dams at Myrick Creek, since there are no actual beavers left there. Dam beavers!

We ended up at a nice Days Inn in Tupelo just after dark, and after we checked in, hit one of the local Walgreens (of which there are many) to get Matt some Airborne to stave off his cold. Then we hit Vanelli’s – the local Italian/Greek mainstay. Dinner was excellent, and about halfway through our meal, the owner came up holding my wallet – it had fallen out of my purse in the parking lot and some kind soul had returned it to her, unopened. Never will I disparage the good people of Mississippi – that was the kindness of strangers in action.

We went back to the hotel, watched some premium cable and conked out. Matt’s cold kept him up a good bit of the night, but I slept like a dead woman.

After a quick breakfast at McDonald’s, we hit Elvis’ Birthplace. They preserved his childhood home, made a museum, bought the building he used to attend church in, built a chapel, etc. In case you hadn’t guessed, Elvisologists take their jobs and themselves very, very seriously. It was fun, though. We also hit downtown Tupelo, and visited the hardware store where Elvis’ mother bought him his first guitar.

On a side note, wouldn’t it be a pain in the ass to live somewhere that idolized an entertainer if you yourself were not a fan of said entertainer? You’d have to move. Here's Maggie's best Elvis: 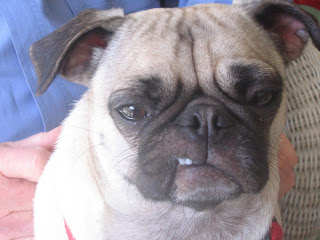 Anyway, after leaving Tupelo, we ate lunch at a cute little Meat and Three in Alabama, we hit the road, and made it back to Nashville in time to get Lola just before the vet closed.
In all, Matt biked over 70 miles, we had some good laughs, some great meals and a wonderful chance to spend time together.

Highly, highly recommended. I’ll try to post some pictures, but you know how I am. All talk, no action.

PS - Matt did actually get a cold, and two days later, so did I! Oh well.