Press Release from a Frustrated Writer 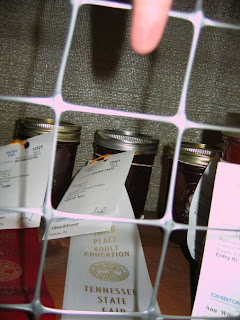 Persistent and Consistent, Jelly Maker Walks Away with Second Third

Nashville resident, woman-about-town and maven of all things capsaicin, Allison Breyer Everett, has placed 3rd in the Tennessee State Fair with her Pepper Jelly for the second year in a row. And though she did not move up in her placing this year, she held steady despite an increase in competition.

While last year, Everett placed 3rd of 6, this year, she arrived at the Agriculture Exhibit to find that she had beat out seven other competitors to place 3rd of 10.

Buoyed by two years of modest success, Everett is considering branching out to enter more categories for the 2010 Fair.

“I’ve looked at the winners’ list from 2008, and what you start to see is that there are maybe a handful of people who win over and over again. The two people that placed ahead of me this year (N. Chambers and O. Chambers, both sharing a last name and both suspiciously of Cumberland Furnace, TN) have wins in multiple categories. I could just as easily pickle peppers with some of my surplus crops, and that may increase my chances of winning.”

This year’s win was not without obstacles. Everett’s first batch of jelly, made in early August, failed to set properly. The following week, she was temporarily sidelined while recovering from surgery in which both her tonsils and adenoids were removed. Though the spirit was willing, the flesh was weak, and during her recuperation period, Allison Everett’s only jelly-related activity was to purchase cheesecloth for straining her peppers on a second attempt.

When Allison was finally strong enough to produce her second batch, she carefully strained the excess moisture from her fruit, doubled her usual amount of pectin and emerged victorious. Everett was elated. Last week, while taking her wares to the fairgrounds, she was surprised to see nearly double the number of competitors and her elation turned to apprehension.

Everett arrived at the Agriculture building yesterday to quickly review the standings, and was delighted to see that she had prevailed.

“I’m glad”, she said of her win. “I was kind of emotional, and I know I was crying at the exhibit, but those were tears of joy. Well, joy and fatigue and maybe I was missing my parents' pugs a little.”

Allison will return to the fairground over the weekend with her husband for official photographs and to claim her jelly and ribbon. The monetary prize $12, will arrive by mid October. Everett plans to use the money to fund part of her Thanksgiving celebration.
Family jelly Matt prize winner