Friday night, Matt and I had a fabulous Thai dinner down in Brentwood. Mmm, red curry!

Saturday morning, I met up with Erika at the Y, where I klutzed my way through a 45 minute class with Lorenza. Good news though - Monday night Zumba is back!!

On my way home, at the corner of 12th and Kirkwood, I saw this empty lot filled with all these gorgeous candy-colored metal gliders. When I got home, I mentioned them to Matt - he had seen them on his bike ride that morning as well. After I showered, we went over and looked at them - the guy selling them finds them, refurbs and sells them - they're all from the 1930s. We kind of liked the blue one, but decided to think about it.

We went and picked up some new shoes for Matt, where I ran into my friend Rosie and her houseguest Laurie, who I'd spent the evening with on Thursday. I love me some small towns. Although, as Matt points out, meeting Rosie in a shoe store isn't exactly mind-blowingly coincidental. Fair enough, she likes shoes.

From there, we hit the East Nashville Tomato Festival. Lots of cute stuff, but my walls are FULL.

On the way back to the house, we decided to stop and make the Glider Man an offer, but alas, the blue glider was gone. There was one just like it in green, which would probably look even better on our porch, so we made him an offer, and he promised to drop it off at the house that evening. 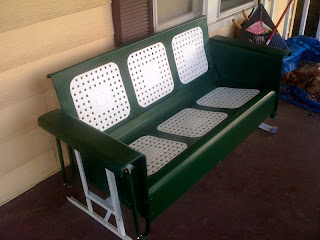 We went home, Matt cut the grass and I cleared off the front porch. About two hours later, we had our glider.

Honestly, I think it's adorable, and I put a photo of it on Facebook, and my friends have confirmed that we have good taste.

If you want one of your own, I can hook you up - we got his card - and he sets up in East Nashville most weekends - this weekend he didn't because of the aforementioned Tomato Festival.

We decided that we'd forgo a fancy anniversary dinner and call this our gift to each other. Perfect, as it seats the two of us nicely. Maybe we'll have a picnic out there on our actual anniversary (or near it, since Matt's traveling and I'll have scabby, gross tonsils).

Speaking of tonsils - five days. Yikes. That in mind, I spent much of this morning cleaning, cleaning, cleaning. I still have plenty to do, and it's going to be a crunch going into the surgery. But once we hit that point, I'll have to slow down for about a week.

We hit the Main Library this afternoon, where I picked up a bunch of good easy reading for my incarceration. Mom and Dad will be here through the Wednesday after surgery, then after they leave, Matt travels for work. I may try to wean off medication so that on Friday, I can get a nice pedicure in time to go back to work at the brand-new office at Cool Springs!. I'll probably be stir-crazy by then.

Well, there's enough peppers to make a second go of it, should that be necessary.

For now though, I need to get my downstairs bedroom in a little better shape before the tribal elders and their pugs arrive.

While I'm not excited about the tonsils, I can't wait to have the pugs here. Eastern medicine.