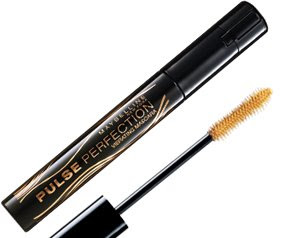 The problem with declaring something the “stupidest thing” you’ve ever seen, is that the world is so creative in its lunacy, that you are constantly having to revise yourself and say, no, wait - that is the stupidest thing I’ve ever seen.

So, I was watching TV the other day, and they showed what is to date, the stupidest thing I’ve ever seen. Maybelline – cosmetics maker for those of us who think Lancôme and Estée Lauder are brands for frenchy-lovin’ snobs (with the ability to recognize circonflexes and accents aigues), has developed a new mascara with an application wand that vibrates. VIBRATES! Seven thousand times a minute! It’s called Maybelline Define-A-Lash Pulse Perfection Mascara. Available anywhere cosmetics are sold!

Because apparently, I’m not doing a good enough job of flinging specks of Dusky Midnight under my eyes all by myself. I’ve espoused my theory before that some girls got pulled aside in 5th Grade, right after the informative menstruation lecture and were handed the keys to the universe – shown how to apply makeup, what to wear, how to accessorize, what to say. I was not one of those girls –they probably told me there were snacks down the hall and I went willingly.

Anyway, at the advanced age of 34 (which let’s face it, is closer to 35 now), I have finally figured out the secret of eyeshadow (other than the obvious notion of not wearing it), but mascara is still an issue. Almost inevitably, if I’m putting on mascara, I’ll need to sneeze just after I’ve applied it – the result is that I look like a walking Rorschach test. Or Tammy Faye Bakker – and really, are those not the same thing? RIP, Tammy Faye.

So, I apply masacara with as light a hand as possible and hope for the best.

I met Lily Tomlin once. I had just seen her one-woman show in NYC with my mother and we waited backstage for her to come out. I begged for an autograph, which I eventually got – but what I remember about her is two things. One, she’s shorter than I would have expected (this was 24 years ago, incidentally) The other thing I remember is that she had really clumpy mascara. Which, given that she’d just done two hours of highly physical theatre, shouldn’t have been surprising. But given that she also probably had a makeup artist, well, I don’t know. Do you think Lily got pulled aside in 5th Grade? I can tell you she was a cheerleader in High School, so she had some savoir-faire. Or at least she could drop it like it was hot.

So anyway, do you have $15 to blow along with a burning desire to know the terror of having a pulsating, goo laden instrument of torture thisclose to the only set of peepers you own? Buy it, try it, and let me know what you think.

I’ll be here waiting for something truly stupid that will surpass this ridiculous im"pulse" buy. See what I did there? Clever. So very clever.
beauty cheerleaders makeup money stars