Why July To Me? 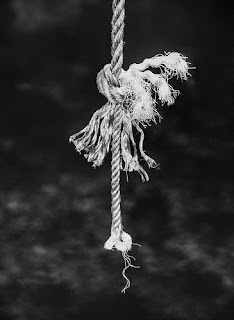 A piece of string walks into a bar. The bartender says, “We don’t serve your kind here.” So the string walks outside, ties himself into a half hitch, rolls around on the ground a little and unravels at both ends. He goes back into the bar and the bartender says, “Aren’t you that string that was in here just a few minutes ago?” To which the string replies, “Nope, I’m a frayed knot.”

I tell that silly joke because before I left for a five day hiatus in the North Georgia mountains, I was a frayed knot. Now that I’ve spent nearly a week with some of my favorite people in one of the loveliest places I know, I feel much less frayed and knotted.

We left Nashville Tuesday night, getting to Atlanta around midnight. We woke up the pugs, though their protests from the crate were brief and didn’t wake my parents. We fell asleep almost immediately.

Wednesday morning, Matt, Dad and I had breakfast at Bagelicious – my favorite bagel joint in all of bageldom. I had rye toasted with olive cream cheese. Salty goodness. Since Wednesday is cheap bagel day at Bagelicious, we got a dozen to go.

Our next stop was Home Depot, where one hour and one hundred dollars later, we had everything we needed to build a small dam. More on that shortly.

We met back up at the house with Mom, did some tech support that allowed Mom and Laura to hold a Skype video conference so that we could see Henry, and Henry could see us. We probably got more out of it than H-Dog, but that’s OK.

After a few delays and missteps (mainly involving lost keys and forgotten bags), we bid Mom goodbye and headed North on GA 400. We arrived in at the cabin around 4PM. We unpacked, ate dinner, watched lightning bugs and went to sleep.

Thursday morning, we started building the dam. The current dam, which we used to pump water into the house, had deteriorated and needed to be rebuilt with stronger, more permanent materials, so that’s what we were going to do. And by we, I mean Matt. Dad was the foreman, Matt was the labor, and my job was to carry materials, run get tools, etc.

On one tool run, I was walking back toward the spring where Matt was trenching out a tight space, and I heard an unmistakable sound. I thought to myself, “Gee, that sounds like a rattlesnake”. 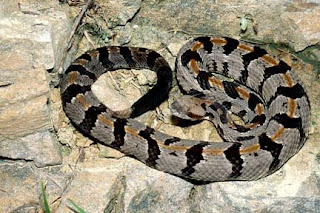 I turned toward the sound, and about six feet from me, there was, sure enough, a large rattlesnake, shaking it like a Polaroid picture. I let out a small yelp and called to Matt and Dad. Dad told me to stay put, and they hustled up the path to get a look at our new friend. Dad decided it was too close to the house for comfort and that he was going to exterminate the serpent. So in an attempt to hack it with a shovel, he lost balance and fell – thankfully not on it, but near it.

Matt guided Dad to roll away from it and got him back on his feet. In the meantime, I ran to the house and got a rifle. Dad fed the snake some lead, and it died. At which point, Dad decided to skin it. I’d never seen or done this before, but hey – I’m game. Matt kept working on the dam while Dad and I removed the skin, stretched it on a board and packed it with salt.

Once we had the rattlesnake issue under control, we focused on the dam, and by dinnertime, it was more or less completed.

For dinner, I cooked a turkey meatloaf, which Dad ate grudgingly, and we recalled the events of the day. After a little TV, we crawled into our beds and slept.

On Friday, Matt went for a ride on the trail at Unicoi, about 30 minutes from the cabin – Dad cautioned Matt to be careful. Pretty ironic given that Dad had nearly fallen on a deadly pit viper less than a day before. Dad and I spent the morning re-screening the front and back doors in order to pug-proof them. I mauled myself with the screen wire, but other than that, those doors can now withstand the most tenacious pug. When Matt got back, he told us he’d seen a black bear crossing the road right near the White County /Habersham County line.

That afternoon, we took what ended up being the only trip down to the waterfall where I plunged into the cold water and let steam escape from my scalp. We went down the mountain for dinner at a “Family Buffet” kind of restaurant, and here’s my advice to you: If you’re ever somewhere that’s hours and hours from the ocean, don’t eat the Seafood Buffet. I’ve never understood the appeal – it was “All Things Fishy and Deep Fried”. Matt and Dad both tried the fried frog legs and I about hurled when I saw it. I’ve been assured that this place is excellent when it’s not the weekend and they leave the seafood in the deep freeze. Oh well. We went home, I threw my cake in the oven, and left it to cool overnight.

Saturday, the club had its annual meeting – Dad and I went, and the only real point of interest is that I’ve been asked to serve on the Membership Committee, which is a feather in my cap, I guess.

That afternoon, we kicked into high gear to get ready for the social. As the head of the Social Committee, I had plenty to do. After rushing to set up the tables, etc., I started icing my cake. It did not go well. 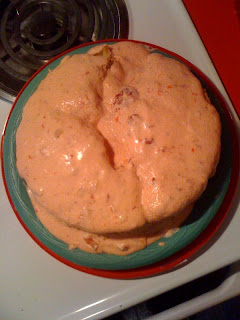 I showed it to Matt, who recommended I not even put it out for consumption. Southern Living, I hate you! No, not really. Well, maybe a little.

Shortly after that, my friend Margaret and her husband Hal dropped by to visit – I told her about the cake, Matt showed her the photo and she said I should just throw it in a bowl and call it a trifle. And that’s what I did. I covered the top with the rest of my strawberry preserves and fresh berries.

Mom arrived, post Peachtree Road Race (she volunteers at the medical tent every year) with pugs in tow. I gave all three dogs a bandana to wear to the party, and shortly thereafter, everyone starting arriving. It was a good crowd with lots of good food – and can you believe it – they ate every bit of my cake disaster and loved it! Margaret made Matt show a few people the picture. Oh well –if you can’t laugh at yourself, then your life is very humorless indeed.

After the party, we all watched some fireworks on TV (next year, I want the real deal), and went to bed. I ended up sleeping really, really late, as did my parents. Matt got up, made coffee, walked all the dogs and just chilled. After breakfast, we packed up, got in our cars and headed back to Atlanta. We helped Mom and Dad unload, went to lunch at El Zorrito (Tlalpeno Soup!) and headed home.

I’m covered in bug bites, scratches and bruises. I found and removed a huge full tick on Lola this morning (way to go, Mother of the Year), and I haven’t even touched the dirty clothes we accumulated over the vacation. But this frayed knot feels like a normal piece of string again. Let’s see how long we can keep it that way.

I’m back at the office, sifting through debris and trying to make sense of it. Tomorrow, I see the Otolaryngologist, and the “good news” is that my tonsils look nasty. So he’ll get a good picture of the real me, and maybe we can get rid of them.

Dad seems to be doing better, more or less. I worry though, as I have for most of my life. Dad calls me his buddy, and that’s pretty true. We had a lot of fun together. Dad could, in his own words, “talk the ears off a billygoat”, and that was true this weekend. I think he may need a little more social interaction, and I think he needs to find something in the way of a hobby. I don’t know what that would be, but…

Mom is enjoying retirement, She was glad to get Laura up and running on a webcam, so that she can see Henry more often than just visits. She had a good time at the Medical Tent on the 4th, though I’d have enjoyed seeing her more than we did. Oh well – we’ll have to travel back to Atlanta at some point. And we're trying to get them to come here as well.

The pugs are crazy, silly, lovely little beasties. They need some hometraining, but they’re great friends to my parents.

Lola has mellowed in her old age. She played and rolled in the grass and gave half-assed barks occasionally, but the old girl tires easily.

All in all, though – life is good. If only I can ease back into reality.
dogs Family fun holidays mountains snake

Erika said…
You really ARE having a wonderful time! Sounds like a fun-filled, yet relaxing, trip. I'm curious about what went wrong with the cake... Let's make a dinner plan for within the next week or so. My month of being child-free begins this afternoon.
July 6, 2009 at 12:30 PM